True Stories from Japan: Beauty and heritage among worldwide competition

Hubert Vo is the Texas State Representative for District 149. He wrote this blog reflecting on his trip to Japan with the Sasakawa Peace Foundation USA from Nov. 14-21, 2014. 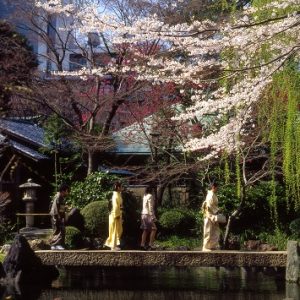 When I arrived in Japan, I was amazed by how polite and respectful people are, even the bus drivers and luggage handlers. They bow when the bus comes and when it leaves, and bow to each other. It seems like I have been away from my birth country for so long, I forgot about that culture. All of the hotel staff were also very friendly and welcoming to Japan. The next day at the train station, the crowd and the cleanliness of the streets and the station were impressive. I saw many workers dressed in suits, from taxi drivers all the way to street workers and vendors.

I had the pleasure to visit the garden designed by an 11th generation garden master. His work is a piece of art. We also had the opportunity to learn about Japanese tea ceremony from Urasenke Foundation, which is very different and something I enjoyed learning.

I think the culture is so beautiful, and they still preserve the beauty of the heritage and tradition of Japan. I saw people, even children, walking the street wearing the kimono, and everyone was very polite. I hardly saw any graffiti. Throughout Japan, I noticed the neatness and cleanliness of every city. I was also very impressed by the low crime rates. I am amazed that police don’t carry guns and only have a baton as a weapon. Even the Japanese police who guard the US Embassy on the outside perimeter didn’t have a gun on them.

I learned that Japan is the 3rd largest economy in the world, but it’s facing some challenges regarding lack of workforce. Families are only producing one infant per family due to high cost of living and the population is getting older, so the shortage of workforce is going to be a greater challenge. Industries are screaming of lack of trained workforce. Women are encouraged by the government to work part time and stay home to make babies. If they work full time, their tax schedule is higher, and they are penalized for working full-time. It seems a better solution would be to assist families with high living costs so they will not struggle to afford life with more children. Japan also faces competition with other Asian countries in terms of cheap labor. They are still looking at US as a role model of new ideas and new technology.

Japan has the option to modify Article IX of their constitution to equip the military defense force, but that’s not the will of the people today. They would rather rely on US protection. They don’t want to be at war if they don’t have to.

In commerce, I can see the strong relationship between the US and Japan. Companies are relocating from Japan to America and vice versa, but I don’t I don’t see much emphasis on small businesses, only large corporations. We understand that 80% of the US economy is from the small businesses. I think that Japan should create opportunities for small businesses to succeed.

In summary, I think the US-Japan relationship is as strong as ever in so many different aspects. For the US and Japan to survive with worldwide competition, they need to have a strong plan to come up with new ideas and research. The universal challenge among both countries is competing with the cheap labor costs from other countries.