Women Rising in Japan? A Post-Trip Briefing by Mine The Gap 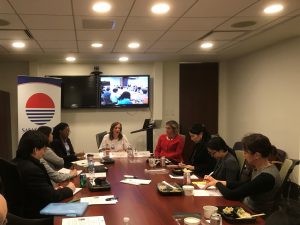 Women’s empowerment has become a topic of interest to companies, non-government organizations, and policymakers in both Japan and the United States, yet women in both countries still face challenges when running for political office. To help address this, Sasakawa Peace Foundation and the Academy for Gender Parity sponsored the co-founders of U.S.-based Mine The Gap for a week-long trip to Japan in July, where they attended events and forums, met with journalists and civil society members, and conducted a weekend training for Japanese women aspiring to run for office. The two co-founders, Kristin Haffert and Jessica Grounds, visited Sasakawa USA on December 4 for a lunch discussion on their trip to Japan, their work promoting gender parity, and the challenges that remain for women running for office around the world. This policy lunch event was moderated by Sasakawa USA Research Assistant Darah Phillip.

The conversation began with a summary of where the United States and Japan stand in terms of the political gender gap. While the recent midterm elections results are set to take the United States from #104 to #75 in global political gender gap rankings, Japan’s ranking is #162, with just 10% of the lower house and 20% of the upper house comprised of women. Through their experiences working on gender parity issues around the world, Haffert and Grounds noted that similar issues exist in every country, although each locale also has their own particular issues. Within this context, Haffert and Grounds’ training in Japan focused on helping the 40 women who participated refine their political messages and craft campaign strategies through a series of group exercises. The training culminated in 10-minute presentations in which the women presented their final campaign strategies in front of judges and a camera crew.

Haffert and Grounds also discussed the hurdles faced by woman political candidates, with particular focus on the role of political parties, fundraising, and traditional gender roles. They emphasized the need for parties to actively seek and welcome woman candidates and highlighted the key role that parties play in securing funding and campaign resources to candidates. They also mentioned woman candidates’ propensity towards changing their behavior and messaging to better match that of men who run for office. For Haffert and Grounds, women need to be encouraged to present their authentic selves when running for office. Overall, the two argued, countries run better, problem-solving is more diverse, and policies are more comprehensive when there is gender parity in politics.

The discussion’s question and answer portion addressed a diverse range of issues related to women’s empowerment and Mine The Gap’s trip to Japan, including questions on the viability of a gender quota in political parties, responses to the #MeToo movement, the stigma attached to non-profit organizations in Japan, and the opportunities and challenges of working with incumbents to support up-and-coming woman candidates. Haffert and Grounds addressed each of these questions and confirmed that initiatives that may work in some countries, such as quotas in Rwanda or non-profit advocacy (eg. Emily’s List) in the United States, may be difficult to implement in other places with different political structures and societal norms. They also reaffirmed that in both the United States and Japan, more can and should be done to promote women’s empowerment and reduce the gender gap in politics.