The U.S., Japan and the Trans-Pacific Partnership 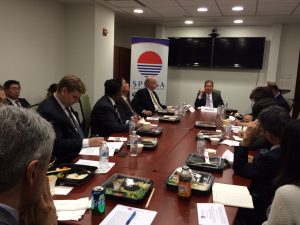 On November 20, 2015, Sasakawa USA hosted a private, off-the-record discussion with U.S Trade Representative Mr. Edward Gresser. After several years of negotiations, the full text of the Trans-Pacific Partnership was finally released on November 5, 2015. Gresser led a discussion on the details of the Trans-Pacific Partnership and its implications for the U.S.-Japan relationship.

Edward Gresser is the Policy Planning Director and Acting Assistant U.S. Trade Representative for Trade Policy and Economics for the US Trade Representative Office. He joined USTR on March 9 after serving as Director and Co-Founder of the think-tank Progressive Economy since 2011, where his research focused on U.S. trade policy, implications of the U.S. trade regime for lower-income Americans and overseas development, and Internet trade and data flow. Before joining Progressive Economy, he was director of the Trade and Global Markets Project at the Democratic Leadership Council and Progressive Policy Institute, as Policy Advisor for then-USTR Charlene Barshefsky during the second Clinton term, and as Policy Director for Sen. Max Baucus. In 2013 he received the Washington International Trade Association’s “Lighthouse Award” for contributions over the course of a career to U.S. trade policy. He is a graduate of Stanford and Columbia Universities.