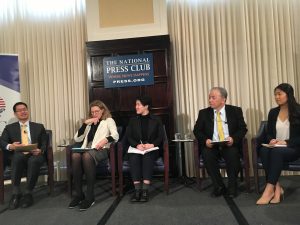 The 6th U.S.-Japan-Korea Trilateral Symposium brought together students and current professionals in the field of U.S.-Asia relations to enhance trilateral cooperation between the U.S., Japan, and the Republic of Korea. The event aimed to both educate and to give the future generation of all three countries a voice regarding the promotion of peace, stability, and prosperity in the Asia-Pacific region. The symposium was held January 4, 2019 at the National Press Club in Washington, D.C.

The panels, “The Role of Soft Power and Media in Trilateral Relations” and “Areas of Collaboration in Addition to Regional Security” created a timely discussion between motivated student leaders and distinguished professionals, showcasing the younger generation’s enthusiasm for cooperative and active trilateral engagement.

Panel I: The Role of Soft Power and Media in Trilateral Relations

The first panel featured two student panelists: Ayoung Kim, from the 12th Korea-America Student Conference (KASC), and Kaho Maeda, from the 71st Japan-America Student Conference (JASC). Joining them were two distinguished leaders: Ambassador Kathleen Stephens, President and CEO of the Korea Economic Institute of America (KEI), and Wataru Sawamura, Washington Bureau Chief of the Asahi Shimbun. The panelists addressed the role of soft power and its ability to influence countries through ideas, technology, and culture, and to promote trilateral relations between the U.S., Japan, and South Korea. The panel also discussed if the media, including social media, made it easier or more difficult to boost these ties.

Ambassador Stephens opened the discussion by highlighting the recent fervor for British rock band Queen, spreading across Japan and South Korea after the release of the movie, “Bohemian Rhapsody” in theaters. This fervor is an example of pop culture’s ability, as a source of soft power, to bypass national borders and historical divisions. The younger generation is increasingly sharing values and commonality through social media, technology, and cultural exchange programs. Forms of soft power that magnify commonality between countries often allow them to face difficult challenges like historical legacy.

The fast pace in which news is consumed by the younger generation is also driving change. Kim noted that these days, “in a world of so much information, attention, is power.” She also pointed that it can be a “race to the bottom” to gain the public’s attention and screen time. South Korea’s previously held cultural anonymity changed rapidly with the international popularity and attention given to K-pop. While hard power gets things done, she argued that soft power creates “waves in international waters, shaping the landscape of the world order, and perception of it.” Soft power is important because it has this influence on world views, and ultimately, what we think leads to how we act.

Sawamura, like Stephens, emphasized that national borders have become less important to the younger generation in Japan with the increasing popularity of foreign pop culture, like K-drama and K-pop. He noted that the enduring anti-Korean and anti-Chinese public sentiment found in many Japanese people over 60 years of age can be used as an example of the “love–hate” generational gap that is evidence of the older generations lack of international experiences, cultural exchange, and diversification of information sources. As many of the older generation usually read newspapers that have a more negative and hardline perspective over other sources of media, they are more inclined to distrust foreign influence. He cautioned about the dangers of journalism if it focuses more on stereotypes and confirmation biases over real-fact based coverage. Maeda also contended that social media may encourage exchange, but its superficiality and ease of access can also create assumptions. She believed that real experiences, like travel and exchange programs, are key to breaking down cultural barriers.

Maeda then turned the discussion to the applicability of soft power to policy. She highlighted the changing landscape of soft power with the rise of multinational corporations. Soft power can become hard power through the role of consumerism and economics to create policy. Maeda asserted that soft power and hard power should not be viewed as two separate entities that rival each other, but a joined effort to influence policy.

The panelists proceeded to discuss how soft power, including pop culture and political values, comes from the people and not the government. Soft power is not meant to be a tool of control and propaganda, but a reflection of values starting from the bottom up. While the United States’ soft power in the region has been widely accepted and obvious, the Japanese and South Korean exchanges of pop culture are a new and exciting trend.

However, challenges remain from the confirmation biases found in the media, the declining number and credibility of experts, and nationalist sentiment in education systems. The panelists concluded that a hunger for intellectual depth, critical thinking, and international exchanges are necessary soft power tools to promote closer trilateral relations.

Panel II: Areas of Collaboration in Addition to Regional Security

The second panel featured two student panelists: Damare Baker, from the 12th Korea-America Student Conference (KASC), and Shunji Fueki, from the 71st Japan-America Student Conference (JASC). They were joined by Emma Chanlett-Avery, Specialist in Asian Affairs at the Congressional Research Service, and Richard Fontaine, President of the Center for a New American Security.

The panel addressed the current challenges facing collaborative efforts between the three countries. Richard Fontaine argued that while there are many reasons for collaboration—including the denuclearization of North Korea, the encroachment of China, and endorsement of democratic values—obstacles like historical legacy and distrust have hindered these efforts.

Chanlett-Avery noted that Japanese and Korean relations ebb and flow. Ironically, North Korean aggression during the Korean missile crisis was “the gift that keeps on giving” for collaborative trilateral relations. Now that North Korea is pursing diplomatic relations, the three states disagree on how to move forward and best engage with North Korea.

Fueki noted Japanese dissatisfaction with their lack of leverage, compared to South Korea and the United States, regarding North Korea. However, Fontaine asserted that substantial change in the way North Korea is handled is possible due to its unpredictable nature.

While North Korea remains a contentious issue, the panelists discussed other areas for potential collaboration that will help build trust between Japan and South Korea. These include intelligence sharing, military exchanges and joint exercises, nonproliferation, and climate change.

A video of the event is available for viewing on the CSPAN website.