On April 20, 2011, Sasakawa USA welcomed Dr. Amy Searight for a private, off-the-record discussion on the current state and future of U.S.-Japan development cooperation in the Asia-Pacific region. 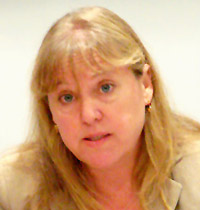 t has been serving as the Senior Policy Advisor for Asia at USAID since 2010. Prior to this position, Dr. Searight was an adjunct fellow at the Center for Strategic and International Studies and assistant professor at the Elliott School of International Affairs at George Washington University, where she also served as Director of the Master of International Policy and Practice program from 2006-2008 and Director of the U.S. Foreign Policy Institute in 2009. Her research and teaching focus on Asian regionalism, Japanese politics, and international trade and financial relations.

In 2003-2004 Dr. Searight was awarded a Council on Foreign Relations International Affairs Fellowship and served as a member of the Policy Planning Staff in the U.S. Department of State, where she helped formulate U.S. regional policy toward Asia, and as special advisor to the U.S. Ambassador for Asia-Pacific Economic Cooperation (APEC).