After the Tokyo Election: The Return of Political Instability?

On July 13, Sasakawa USA hosted a lunch discussion, “After the Tokyo Election: The Return of Political Instability?” with Tobias Harris, Sasakawa USA Fellow for Economy, Trade, and Business, and Sheila Smith, Senior Fellow for Japan Studies at the Council on Foreign Relations. The discussion was moderated by Sasakawa USA CEO Ambassador James Zumwalt, and included a robust question and answer session with attendees.

Mr. Harris kicked off the conversation with an overview of the July 2, 2017 Tokyo Metropolitan Assembly elections in which Prime Minister Abe’s Liberal Democratic Party (LDP) lost its majority position in the Assembly. The loss was coupled with a notable drop in Shinzo Abe’s approval rating — the prime minister is experiencing net negative approval ratings for the first time since the reinterpretation of Article 9 of the Japanese constitution in September 2015. While this is not the first time for Prime Minister Abe’s approval ratings to slip, Mr. Harris noted that public opinion polls show that trust and confidence in Abe is eroding, with damaging effects on the LDP. According to Harris, the only remaining options may be for the prime minister to directly address unanswered questions about his involvement in the Kake Gakuen scandal, or to somehow backtrack on his promise to revise the constitution by 2020.

Dr. Smith’s took a deeper look at the Tokyo Assembly election in her remarks, highlighting the extent of the LDP’s and Democratic Party’s losses and the relatively high proportion of women elected in the election. Although the July 2 election saw a slightly greater voter turnout, the LDP lost over 350,000 votes from the previous election and over half of their seats in the Assembly. Smith went on to temper suggestions that Tokyo Governor Yuriko Koike’s Tokyo Residents First Party’s win might portend the decline of the LDP on a national scale. Unlike the Osaka Isshin Party, which strives to create national change starting in Osaka, Koike’s Party agenda is narrowly focused on governance in Tokyo and not attempting to disrupt LDP dominance.

The discussion then turned towards factional politics within the LDP, with Dr. Smith and Mr. Harris addressing movements by the Aso and Kishida factions to position themselves favorably ahead of next year’s national elections.

The event concluded with a Q&A session in which attendees asked about the future of Japan’s foreign policy with Abe’s leadership in question, prospects for an opposition party that could stand up to the LDP, and the impact of economic growth on the electorate’s decisions. 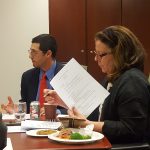 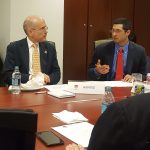 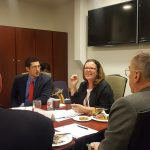 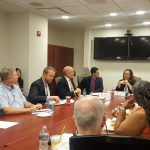 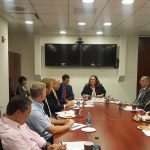