On June 22, 2011, Sasakawa USA welcomed the Honorable Robert King for a private, off-the-record discussion on human rights issues in North Korea and their implications for neighboring countries such as Japan. 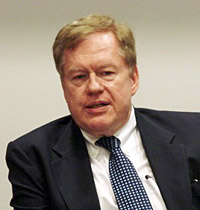 Robert King became the Special Envoy for North Korean Human Rights Issues in November 2009. He has been a frequent visitor to North Korea and other countries most directly concerned with developments in Pyongyang.

Ambassador King spoke at Sasakawa USA just after returning from Japan and South Korea. Prior to his appointment as Special Envoy, Ambassador King worked on Capitol Hill for 25 years – 24 of those years as Chief of Staff to Congressman Tom Lantos (D-California). He was concurrently Staff Director of the Foreign Affairs Committee of the U. S. House of Representatives (2007-2008), Democratic Staff Director of the Committee (2001-2007) and held various professional staff positions on the Committee since 1993. Ambassador King holds a Ph.D. in International Relations from the Fletcher School of Law and Diplomacy and has authored five books and some 40 articles on international relations.