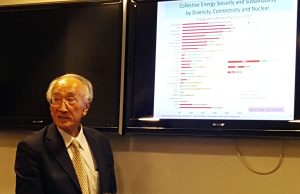 On July 11, 2017, Sasakawa USA hosted a policy lunch featuring Nobuo Tanaka, Sasakawa Peace Foundation’s Chairman and former Executive Director of the International Energy Agency. Tanaka-san presented his analysis of the current state of nuclear power, specifically with respect to energy security and the U.S.-Japan relationship. The event brought together energy and industry experts to discuss the future of nuclear energy in Japan and the United States, and opportunities for cooperation.

Nobuo Tanaka graduated from the University of Tokyo in the field of economics in 1972, and has an MBA from Case Western Reserve University, Cleveland, Ohio (1979). As a Japanese official, he served in many prestigious posts including as Minister of Energy, Trade and Industry at the Embassy of Japan in Washington, D.C., the Director for Science, Technology and Industry at the OECD, and Director-General for the Multilateral Trade System Department of the Ministry of Economy, Trade and Industry. He also is a Professor at the Graduate School of Public Policy, University of Tokyo.