Good morning, everyone. Thank you for the opportunity to participate in today’s event with the Japan U.S. Military Program (JUMP), co-organized by the Embassy of Japan in the United States and Sasakawa Peace Foundation USA. I am grateful to see Ambassador Tomita, who just assumed his post; Dr. Akimoto; and Admiral Walsh, who served as the commander of Operation TOMODACHI.

It has been ten years since the Great East Japan Earthquake, which was Japan’s greatest national crisis in recent years, resulting in many casualties. I would like to once again thank those who immediately extended their support after the disaster: the U.S. government, the American people, Ambassador Roos and the staff at the U.S. Embassy in Japan, and our many friends in the U.S. military who served on the ground during Operation TOMODACHI.

The areas affected by the disaster are recovering, but there are still many issues to be addressed, including decommissioning the Fukushima Daiichi Nuclear Power Plant. As recently as last month, on February 13, a 7.3 magnitude earthquake hit Fukushima and other areas, injuring more than 150 people. This was apparently an aftershock of the Great East Japan Earthquake. Major earthquakes like these are still a traumatic reminder of 10 years ago for many Japanese people—especially those in the areas affected by the disaster.

The Great East Japan Earthquake was a complex disaster consisting of an earthquake, tsunami, and the accident at the Fukushima Daiichi Nuclear Power Plant. The Ministry of Defense dealt with this on all fronts, from the Self-Defense Forces (SDF) on the ground to the Minister himself. It was the largest operation since the SDF’s inception, not only in terms of the scale of the deployment, with up to 107,000 personnel, but also in terms of the range and difficulty of activities, including operating for the first time while being exposed to radiation and collaborating with U.S. forces to respond to the disaster. This was also the first time the SDF had formed a joint task force as part of disaster relief operations. It was only the fifth year since the establishment of the Joint Staff, which unified the Ground, Maritime, and Air SDF to better assist the Minister of Defense in operational matters. In terms of practical integrated operations, our only experience until then had been in dealing with North Korean ballistic missiles.

Operation TOMODACHI is a testament to the strength of the bond between the SDF and the U.S. military. I believe that this is due in large part to the mutual trust and connection that we have developed through years of joint training, as well as dialogue between Japanese and U.S. commanders and staff. This includes many U.S. military personnel who have worked with the SDF in Japan, and I am grateful that they are now watching this virtual event. I myself had frequent meetings with successive U.S. military commanders in Japan, including Lt. Gen. Field. I also sought opportunities to have strategic discussions with Admiral Willard, Commander of the U.S. Pacific Command, in Japan and Hawaii, as well as with Chairman Mullen of the Joint Chiefs of Staff. Through these meetings, I was reminded of the importance of friendships, or strong people-to-people relations, and how they are one of the foundations of the Japan-U.S. alliance.

When a large unit begins an operation, coordination among personnel is extremely important for sharing information and staying united in our response. In the case of Japan and the United States, the U.S. forces dispatched their liaison officer in Yokota to the Joint Staff as early as midnight on the day of the disaster. Then the SDF began to coordinate with the U.S. Army, Navy, Air Force, and Marine Corps through the headquarters of U.S. Forces Japan. After the JSF was launched on March 24, bilateral coordination offices were established at the Joint Staff Office in Ichigaya, the U.S. Forces Japan headquarters in Yokota, and the Northeastern Army General Staff Office in Sendai to closely coordinate activities. The Minister of Defense and other high-ranking Japanese officials who visited these coordination centers saw Japanese and U.S. military personnel working together seamlessly, and were apparently impressed by the close relationship between the SDF and the U.S. military.

In 2015, four years after the disaster, we discussed what is called “Guidelines for Japan-U.S. Defense Cooperation,” and revised the “Alliance Coordination Mechanism” between Japan and the United States. We agreed to continuously strengthen policy and operational coordination, even during peacetime. The guidelines also called for Japan-U.S. collaboration in responding to large disasters, as well as the U.S. military’s participation in the SDF’s disaster-related drills. As a result, the “Alliance Coordination Mechanism” has been used to closely coordinate our responses to the Kumamoto earthquakes in 2016, the frequent North Korean ballistic missile launches in 2016 and 2017, and China’s persistent activities around the Senkaku Islands.

I would like to turn now to the activities of Operation TOMODACHI. Immediately after the disaster struck, the U.S. Army, Navy, Air Force, and Marine Corps made full use of their capabilities to support people’s livelihoods in the affected areas, help rebuild schools and railroads, and quickly restore Sendai Airport. This was the first time the U.S. military worked among Japanese people affected by disasters, and, to be honest, I was initially concerned about how they would interact with each other. But my fears were unfounded. U.S. military personnel who were part of Operation TOMODACHI were respectful of the Japanese people’s wishes as they provided disaster relief and supported their daily lives. The gratitude and trust of the local residents toward the U.S. military are evident in the many photos from back then, especially in the eyes of the children and the elderly.

Admiral Walsh joined Ambassador Roos and Commander Willard of the Pacific Command in visiting and encouraging those who were staying in schools and other shelters. Admiral Walsh told us that he was impressed with their discipline and orderly shelters and that he was pleasantly surprised by their applause of appreciation. He said that participation in Operation TOMODACHI was meaningful for the U.S. military. I was touched by that comment, both as a commander and as a Japanese citizen.

In terms of the nuclear accident in Fukushima, the U.S. government and the U.S. military provided Japanese government entities and the SDF with a wide range of expertise on nuclear reactors and other issues. The SDF does not have nuclear aircraft carriers or nuclear submarines, so our knowledge in this area was limited. In addition to the information shared by experts in the U.S. military, we benefited greatly from the support of the Global Hawk surveillance aircraft, monitoring equipment, and the Chemical Biological Incident Response Force (CBIRF) dispatched from Washington.

But during the ten days between the earthquake and the launch of the bilateral joint coordination centers, tensions were high between the Japanese and U.S. governments, mainly on the issue of sharing information on the Fukushima nuclear power plant. Some even said that the Japan-U.S. alliance was in crisis. I understand that it was the SDF and the U.S. military, as well as the efforts of diplomats and defense officials in both countries, that maintained and strengthened bilateral ties during this difficult period. The presence of U.S. forces in Japan was another major factor. In the future, when the Japanese and U.S. governments face other situations that need to be handled jointly, the Fukushima nuclear accident will serve as a great point of reference.

While responding to the disaster, we were also concerned about the activities of other countries’ militaries around Japan. Helicopters and small aircraft from Chinese government vessels came unusually close to Maritime SDF destroyers in the East China Sea, and Russian electronic reconnaissance aircraft and fighter jets were active as well. The SDF had dispatched 100,000 personnel for disaster relief partly in anticipation of these events, but we had to step up our surveillance activities even more. Given the limited strength of the SDF, we found it very reassuring that the U.S. forces were conducting surveillance activities in East Asia, even while carrying out Operation TOMODACHI.

Lastly, I would like to share an episode about Lt. Gen. Field, who was the Commander of U.S. Forces Japan. As the situation at the Fukushima nuclear power plant worsened after March 12 and U.S. citizens in Japan began to evacuate, he reportedly told his interpreter, “You and I will be the last Americans to leave Japan. If the Command in Yokota breaks down, we will move it to Nagoya, which is unaffected by the disaster, and work there until the end.” I would like to thank Lt. Gen. Field once again for his strong commitment to support Japan, as well as the U.S. forces led by Admiral Walsh. As the Chief of the Joint Staff at the time, and as a member of the SDF, I am truly grateful.

The support of the U.S. government and the U.S. military embodied the strength of the Japan-U.S. alliance. It was Operation TOMODACHI, or “friends,” in the truest sense of the word. I would like to express my heartfelt gratitude to the many military personnel and civilians who were involved in Operation TOMODACHI. Thank you very much. 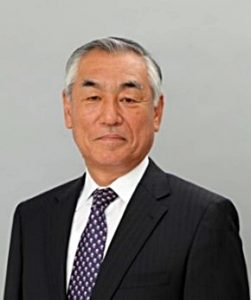 General Ryoichi Oriki (JGSDF, Ret.) served as Chief of Staff of the Joint Staff of Japan Self-Defense Forces (JSDF), a position he assumed in 2009. In this capacity, he commanded JSDF’s responses to North Korea’s No-dong missile launches and the deployment of counter piracy enforcement forces off the coast of Somalia in 2019, as well as JSDF’s operations in the aftermath of the 2011 Great East Japan Earthquake. Since retiring from the JSDF in 2012, he has assumed a number of positions such as Special Advisor to the Ministry of Defense, and currently serves as Space Policy Committee member of the Japan’s Cabinet Office among others. He joined the Japanese Ground Self-Defense Forces (JGSDF) after graduating from the Defense Academy in 1972, and subsequently held positions including Middle Army Director-General, Commander of the 9th Division, and Director of the Equipment Division of the Ground Staff Office.