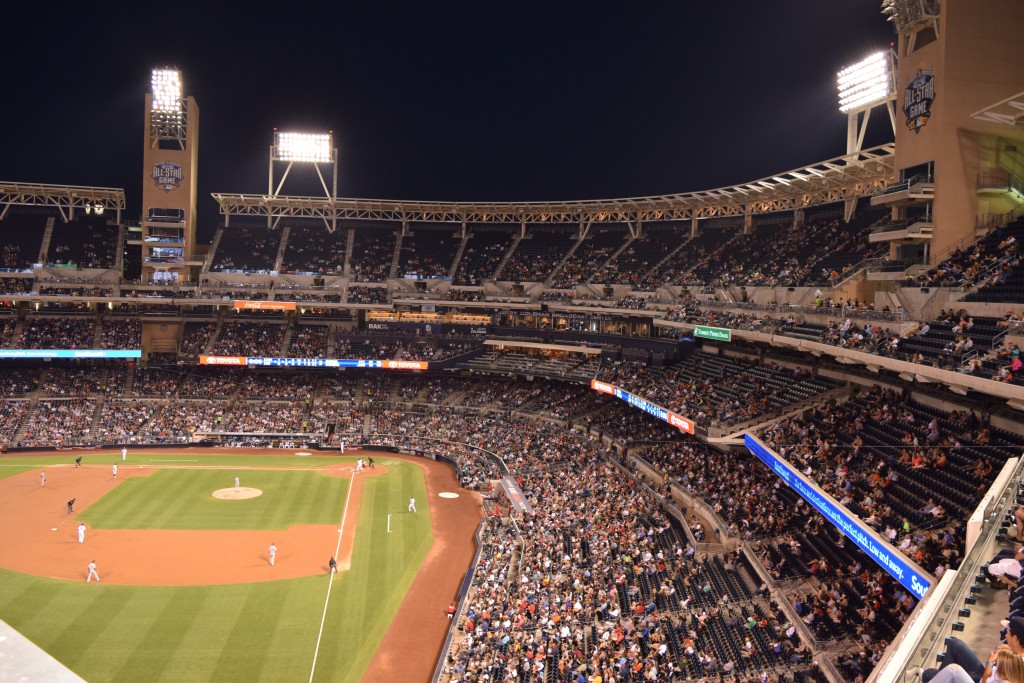 Sasakawa USA’s JUMP Program returned to San Diego’s Petco Park on June 14 for the second consecutive year. In cooperation with the Japan Society of San Diego and Tijuana, the JUMP team invaded right field for a Padres vs. Marlins game. JUMP included American forces at this event as well as visiting Japanese forces from a three-ship training squadron with the Japanese Maritime Self Defense Forces who were in San Diego for a port call.

The event began with introductions at 6:25 p.m. at the T-Mobile Home Run Deck in right field, followed by welcome remarks and a ceremonial start to the event with a kanpai toast. An on-field ball cap exchange took place at home plate just before the 7:10 p.m. game. Throughout the course of the game, those in attendance enjoyed baseball and the company of others who have served in Japan.

Read more about the event in our recap here.

Last year’s event was a great success with participation from the TOMODACHI / NAJAS Youth Baseball Exchange program as well as RAdm. Markham Rich, Commander of Navy Region Southwest; City of San Diego Councilmember Chris Cate; County of San Diego Supervisor Ron Roberts; and William Farrell, the Chairman of the National Association of Japan America Societies. This year promises to be even bigger and better, with more JUMP members attending and participation from visiting Japan Maritime Self Defense Forces. Come join us for some Major League Baseball as JUMP takes over Petco Park and celebrates the U.S.-Japan alliance.

Since the last time JUMP descended on the city of San Diego, the program has grown by leaps and bounds. We have hosted events in a variety of locations and our social media presence has blossomed. We have had overwhelming support from our members, including all those that came to visit us at the Sakura Matsuri in Washington, D.C. in April.

The Japan U.S. Military Program (JUMP) connects past and present service members, families, and government civilians who have served in Japan. Through social networks and events, JUMP builds relationships and provides opportunities for service members to engage with each other. JUMP provides a powerful foundation for sustaining the solid alliance and relationship that exists between the U.S. and Japan.