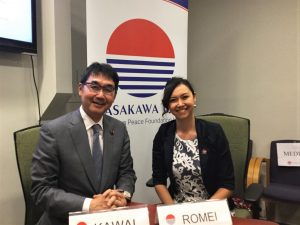 In his on-the-record remarks, Kawai spoke about the summit between President Donald Trump and North Korea’s Kim Jong Un and what the results show about President Trump’s impression of alliances and their cost. According to Kawai, President Trump is weighing national security and economic value on the same scale when evaluating relationships with other countries. Kim Jong Un is likely satisfied with the results of the summit, but, although President Trump has stated that the meeting was successful, it is unclear what the President is aiming for.

Moving his discussion to the issue of Japanese citizens abducted and held by North Korea, Kawai expressed concern over Japan’s lack of leverage over resolving the abduction issue due to its lack of military strength. Nonetheless, Kawai asserted that a Japan-North Korea summit meeting would be the final puzzle piece missing in the effort to guarantee peace on the Korean peninsula. Of the countries involved, Japan is best equipped to support North Korea to develop its infrastructure and economy should peace take place, said Kawai.

Japan should continue to enforce sanctions and apply pressure to North Korea, but it should also maintain a flexible mindset when dealing with the country, Kawai said.