Report from Sasakawa USA’s Journalism Fellowship: Fukushima and the 2020 Olympics 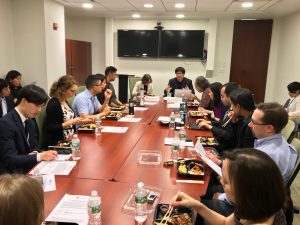 On June 07, 2018, Sasakawa USA hosted Seth Berkman, contributing sports reporter at The New York Times, for a luncheon titled “Report from Sasakawa USA’s Journalism Fellowship: Fukushima and the 2020 Olympics.” Berkman was the 2017 recipient of the Sasakawa USA Journalism Fellowship, offered in partnership with the International Center for Journalists (ICFJ). Nearing the two-year mark before the opening of the games, the luncheon kicked off Sasakawa USA’s discussion on the Tokyo 2020 Summer Olympics, and served as an opportunity to learn about Berkman’s experience reporting in Japan.

Berkman began with an overview of his goals, activities, and methodology from his reporting trip to Tokyo and Fukushima for the Journalism Fellowship, which led him to produce the following three stories published in The New York Times:

● December 1, 2017: In Japan, Ohtani is a Special Player but Definitely Not Babe Ruth

Discussing from the perspective of a sports writer, Berkman then shared his personal observations about Japan and the overall mood in the country ahead of the 2020 Olympics, and delved into his findings on Fukushima’s goals and challenges as it prepares to host the baseball games in 2020 Olympics. In addition, he addressed questions about the differences and challenges of reporting in Japan as compared to the United States, the world’s expectations for the 2020 Olympics, and the role of the media in facilitating understanding on Japan in the United States

The luncheon was held off-the-record as part of Sasakawa USA’s Alumni Program, and moderated by Juliane Doscher, Executive Assistant to the CEO & Program Assistant at Sasakawa USA. Approximately 20 people attended the lunch for discussion and networking.