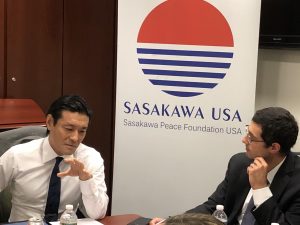 The presidential elections ushered Japanese Prime Minister Shinzo Abe into his third term as LDP president, allowing him three additional years as Prime Minister of Japan. Harris noted that although Abe’s victory appeared on the surface as a landslide win, in reality, the prime minister only has two years of action left, with his final year likely dedicated to figuring out who will be his successor. Abe’s hopes for constitutional revision to legally recognize the existence of Japan’s Self-Defense Forces is unlikely to happen, predicted Harris. Instead, Abe will see his actual power in his ability to guide Japan’s foreign policy. Yet, even on that front, Japan’s relationships with Russia, China, and North Korea show both opportunities and limitations. With the threat of auto tariffs still in the air, questions also remain on the future of U.S.-Japan economic relations.

Nakayama emphasized that Abe’s chief legacy may be in the institutions he supported and shaped, such as Japan’s National Security Council. The election results showed a relatively weak position for Abe on the prefectural level. However, public demand for stability after high prime minister turnover before Abe, a difficult foreign policy environment, and the strength of those around Abe ensured his success. Abe’s consistent emphasis on economic growth, his perceived ability to deftly manage U.S.-Japan relations due to his relationship with Trump, and his ability to balance between the LDP’s left and right wings also remain important to political leadership. Nakayama also noted that the LDP still does not face a serious challenge from Japan’s progressive parties, making it unlikely for Abe’s successor to come from outside of the LDP.

The open discussion focused on the potential shocks that Abe may have to deal with in his final term, such as a trade war with the United States, a peace treaty on the Korean peninsula, or a change in the U.S. presence in the region. Participants also asked about what’s next for Japanese politics, questioning the viability of opposition parties and possible candidates for LDP’s next presidential election. While there are a number of potential rising stars within the LDP, Abe’s upcoming cabinet reshuffle may provide hints as to who may be next.