Politics and Security in Japan after the Elections 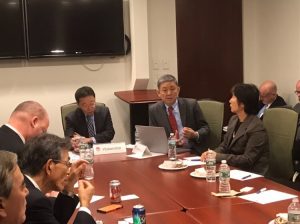 Tsuneo Watanabe began by discussing Japan’s October snap election, noting that while Prime Minister Shinzo Abe and the Liberal Democrat Party (LDP) tactically won the election gaining a two-thirds majority in Parliament’s Lower House, Abe has not truly secured a high approval rating. At the time of the election, many people were frustrated with Japan’s leadership but perhaps uncomfortable electing a new, untested leader at a time when stability in East Asia is at stake. The Party of Hope had a strong start, but Yuriko Koike, the party’s former leader, “showed arrogance and backed herself into a corner” when she publicly said she would exclude former members of the Democratic Party, said Watanabe. While Koike primarily wanted to exclude four people from the party, her statements about a larger exclusion policy ended up benefiting Abe and his cabinet, contributing to the Party of Hope’s loss.

Lt. Gen. Yamaguchi followed Watanabe’s comments with a brief discussion on security. Japan must contend with different challenges in the region, including North Korea’s pursuit of acquiring intercontinental ballistic missiles (ICBM) and a rising Russia and China. With regards to North Korea, Yamaguchi explained that the current situation has worried Japan, but the possibility of Kim Jong-un acquiring ICBMs has forced U.S. perception of the threat to finally match Japan’s. At the same time, the U.S.-Japan alliance is stronger than ever, and the quadrilateral relationship between the U.S., Japan, India, and Australia can help maintain stability in the region.

During the Q&A session, the question of whether Prime Minister Abe will propose amending Japan’s Constitution arose. Mr. Watanabe explained that Abe will have to be pragmatic because while the LDP coalition maintains a two-thirds majority in the Lower House, passing a Constitutional amendment is not guaranteed and is also unpopular with the public. Because many liberal LDP members are uncomfortable with Abe’s conservative ideas, they may be more inclined to support an amendment proposed by someone else. Yamaguchi added that amending the Constitution may help the Japanese public become more confident with the Self Defense Forces in the long-term.