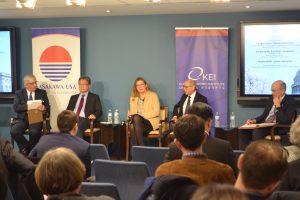 On January 8, 2019, Sasakawa USA and the Korea Economic Institute of America co-hosted “Northeast Asia and the New Congress” at the KEI Conference Facility. Congressman Charles Boustany, Counselor and Chair of the Center for Innovation, Trade, and Strategy at the National Bureau of Asian Research, Ambassador Kathleen Stephens, President & CEO at KEI, Ambassador James Zumwalt, CEO at Sasakawa USA, and Ambassador Joseph Yun, Senior Advisor to the Asia Center at the U.S. Institute for Peace, spoke at the event, which was moderated by KEI Vice President Mark Tokola.

In his remarks, Congressman Boustany said that politics will dominate the the U.S. Congress for the two years leading to the 2020 presidential election. Constant media coverage and social media will likely accelerate this trend. While Congress’ Democratic majority could restrain the President, Boustany expressed concern that many new members of the Congress have inadequate experience, which could weaken the institutional strength of the House of Representatives. Looking ahead to the 2020 presidential elections, Ambassador Stephens suggested that many democratic presidential candidates are likely to advocate for a shift in U.S. foreign policy.

As for the Trump administration’s North Korea policy, Stephens said the lack of communication between Washington and Pyongyang is the most worrying. There has been very little preparation taking place for a second Trump-Kim summit, which is likely to occur in 2019. Ambassador Yun agreed, adding that there has not been enough preparation or goal-setting for the second meeting between Trump and Kim, and that the meeting would likely be similar to the first one in Singapore in 2018. This would be counterproductive. Ambassador Zumwalt commented that the National Security Strategy mentions the importance of alliances, and that the U.S. presence in Japan and South Korea is mutually beneficial for the United States, Japan, and South Korea. According to Stephens, a disruption of the U.S. alliance system in East Asia could be seen as an opportunity by China.

Lack of multilateral efforts is another concern shared by the speakers. Zumwalt said the U.S. withdrawal from the Trans-Pacific Partnership, while the remaining countries moved forward with the new version of the agreement, will favor agricultural-exporting signatories such as Australia and ultimately harm U.S. interests. Actors sharing the same concerns, such as the United States, the EU and Japan, also should coordinate their policies regarding China.

Congressman Charles Boustany, Counselor and Chair of the Center for Innovation, Trade, and Strategy, National Bureau of Asian Research