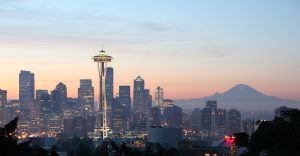 In coordination with the Japan-America Society of the State of Washington and the Nisei Veterans Committee, Sasakawa USA’s Japan-US Military Program (JUMP) hosted an event in Seattle, Washington on September 10, 2017 from 10 am to 2 pm.

The event coincided with the annual U.S.-Japan Rising Thunder training exercises at the Yakima Training Center, and included a tour of the Nisei Veterans Committee Memorial Hall in Seattle, a luncheon, special guests and speakers, and taiko drumming.