New Developments in North Korea: A View from Japan

On March 15, 2011, Sasakawa USA welcomed Dr. Hajime Izumi for a private, off-the-record discussion on the latest developments in North Korea and their implications for Japan. 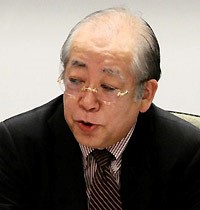 umi, one of Japan’s leading experts on North Korea and a private advisor to top Japanese government and political figures, is Professor of International Relations and Director of the Center for Korean Studies at the University of Shizuoka. He is the author of numerous articles on North Korea’s foreign policy and politics as well as on Japan’s policies towards Korea. He was also served as visiting scholar at Harvard University, fellow at the United States Institute of Peace and the Research Institute for Peace and Security in Tokyo, and as researcher at Yonsei University in Soeul. He received his degrees from Chuo University and Sophia University.