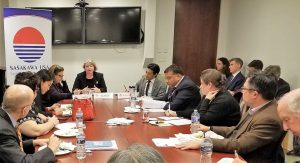 On October 25, 2018, Sasakawa USA hosted the Honorable Sharon Burke, Senior Advisor and Director of the Research Security Program at New America, at a luncheon to discuss her recently published paper “Strength Through Peace: Japan in the 21st Century Competitive Space.” The luncheon was held as part of Sasakawa USA’s Alumni Program and the paper is a culmination of Burke’s research from her travels to Japan in February 2018 for Sasakawa USA’s In-Depth Alumni Research Trip.

Dr. Sheila A. Smith, Senior Fellow for Japan Studies at the Council on Foreign Relations, acted as commentator, and Dr. Toshihiro Nakayama, Japan Fellow of the Asia Program at the Wilson Center and Professor of American Politics and Foreign Policy at the Faculty of Policy Management at Keio University, served as moderator. Approximately 30 people from think tanks and businesses attended the event.

Juliane Doscher, Executive Assistant to the CEO & Alumni Program Coordinator for Sasakawa USA, opened the event with remarks, followed by Dr. Nakayama’s introductions of the speakers and Burke’s research topic.

Despite her extensive knowledge of Japan and the U.S.-Japan alliance, Burke had only limited opportunities to travel to Japan prior to participating in the trips organized by Sasakawa USA. For context at the luncheon, Burke introduced her “Phase Zero” research project at New America on conflict prevention and strategic advantage. On her research trip, Burke addressed questions regarding Japan’s approaches to national security in the “21st century competitive space.” Burke explained that the thesis of her Sasakawa USA paper compares current U.S. and Japanese approaches to national security and addresses the importance of non-military instruments of power. Burke argued for Japan’s unique potential to build global security and address long-term global challenges, such as climate change, in the 21st century.

Following Burke’s remarks, Dr. Smith, a longtime observer of Japan and a renowned Japan expert, offered her remarks and feedback on Burke’s thesis. Dr. Smith highlighted the effectiveness of the key terms used in Burke’s paper such as Japan’s potential to play a “constructive” and “catalytic” role as “security builder” and the country’s ability to improve “global readiness.” In addition to offering suggestions for strengthening her thesis, Dr. Smith identified follow-up issues derived from the paper such as lessons the United States could draw from Japan’s use of non-military instruments of power and the benefits that Japan’s unique approach to national security has brought to Japan. Dr. Nakayama also added insights, including Japan’s views of its use of Official Development Assistance (ODA) as part of its national security strategy.

The speakers’ comments spurred a lively Q&A and discussion session. Topics ranged from the dynamics of Japan-U.S.-China relations to the importance of examining Japan’s expectation toward the United States and the U.S.-Japan alliance as well as the willingness and desire among the Japanese to play a more proactive role in global security.