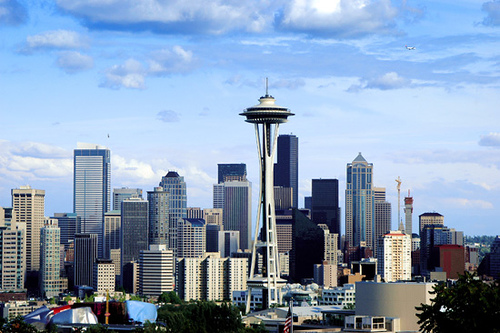 In coordination with the Japan-America Society of the State of Washington and the Nisei Veterans Committee, Sasakawa USA’s Japan-US Military Program (JUMP) held event in Seattle, Washington on September 17, 2016.

Members of the U.S. Army, U.S. Air Force, and Japan Ground Self-Defense Forces came together for the event to honor the Nisei Veterans—second-generation Japanese-Americans who served in the segregated 100th Battalion/442nd Regimental Combat Team (RCT) and the Military Intelligence Service (MIS), during World War II.

The event, held in coordination with the Japan-America Society of the State of Washington and in partnership with the Nisei Veterans Committee and the Consulate General of Japan in Seattle, included American and Japanese forces, officials with Joint Base Lewis McChord, and veterans from the area who have served in Japan. The event coincided with the annual U.S.-Japan Rising Thunder training exercises at the Yakima Training Center.

Held from 10 a.m. to 2 p.m. at the Nisei Veterans Committee Memorial Hall in Seattle, the event included a tour of the venue, a luncheon, special guests and speakers, taiko drumming, and a special video presentation featuring WWII veteran Sam Mitsui.

JUMP welcomed distinguished guests to the program including: