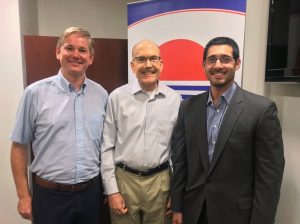 To begin, Harris offered his five main takeaways from Japan’s upper house election, held the day before on Sunday, July 21, 2019. First and foremost, the election secured Prime Minister Shinzo Abe’s control of the House of Councillors and ensured his administration will continue to wield effective influence over its legislation process. Although the Liberal Democratic Party (LDP) fell short of winning the super-majority which would have allowed him to quickly push through Constitutional revisions, Abe and the LDP received enough seats to maintain the majority of the Diet. The second takeaway was that Komeito, a coalition partner of the LDP, gained two seats while the LDP lost ten. These gains were notable as it increases Komeito’s influence within the coalition and enables them to assert stronger stances against constitutional reform. Third, the election strengthened Constitutional Democratic Party (CDP)’s role as the leading opposition party. This was the first upper house election for the CDP since its inception in 2017, and in Sunday’s race, the party won close races against the LDP in single-member districts. 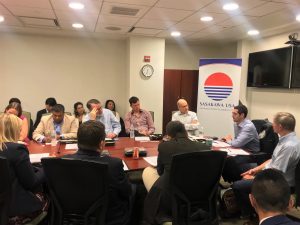 Fourth, although the opposition bloc’s electoral alliance performed well, their gains were not enough to have a significant impact on Diet power dynamics. Notably, the opposition won in ten out of 22 single-member districts which limited LDP gains, but the ruling coalition still controls a majority in the chamber and sets the agenda. The final takeaway was that Japanese voters demonstrated their overall “disengagement” from the political process, as exit polls showed some of the lowest voting rates in the post-war era. While the election results ratified and stabilized Abe’s regime, the low voter turnout could be interpreted as proof that Abe is not necessarily loved by people—they just preferred the status quo and “voted” by staying home. Harris concluded by positing that this situation will likely continue for the foreseeable future, ensuring political stability for Japan.

Following Harris’ remarks, Dr. Oros added his perspective before diving into policy implications of Japan’s election results. First, he did not view the election as a failure for the LDP to secure two-thirds supermajority since Abe himself did not push this agenda during the campaign. But he agreed with Harris that the results indicated Japanese people voted for stability, as the outcome of the upper house election 2019 was almost identical with that of 2016. Dr. Oros cited a recent Pew Research Center’s global attitudes survey that found only 40% of Japanese respondents were satisfied with how their democracy was working, which underscored Japanese apathy to the political process. As young Japanese adults are graduating into a desirable labor market, they are not as driven to vote for change.

Regarding implications for policy, Dr. Oros emphasized that this week’s victory for the LDP enabled Prime Minister Abe to become the longest-served prime minister in Japan.  Although his tenure as LDP leader will expire in 2021, it is possible he could extend it again. Fumio Kishida, a once rival or possible successor to Prime Minister Abe, lost his influence as the four incumbents he supported did not win re-election. For financial policy, Dr. Oros thinks Abe’s intention to increase consumption taxes will yield positive results, given that Japan has huge deficits. He believes the LDP will achieve this although there will be pushback from oppositions parties. On defense policy, there is concern the Strait of Hormuz could trigger tensions between the United States and Japan, if Japan chooses not to dispatch its SDF ships on the basis of legal concerns. At stake, host-nation support could become a problem between the two countries. Finally, Dr. Oros pointed out that female candidates secured the largest percentage of election victories in Japan’s history. At least 28 female candidates were elected to the upper house, setting a record for the number of women in the chamber. However, their victories were unequal across party lines, as about half of CDP candidates were female, whereas LDP did not advance as many female candidates. 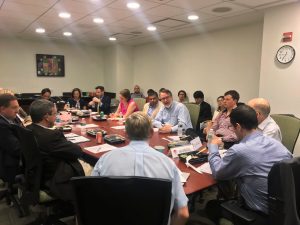 In the following Q&A session, participants actively joined the discussion. One attendee asked about the speakers’ assessments of the progressiveness of parties, and how the LDP measured against their opposition, particularly on supporting female candidates. While Harris and Dr. Oros admitted that they did not have enough data to give an in-depth review of each party’s performance, they both mentioned Reiwa-Shinsengumi, the party led by Taro Yamamoto, which made particular efforts to promote minority candidates in this election. Reiwa-Shinsengumi placed two disabled people as the first and second prioritized candidates on its proportionate list, which directly led to their victories even at the expense of Yamamoto’s own seat. These two elected candidates are expected to highlight the importance of representation of disabled people in Japan. On the other hand, it could be noted that the LDP did not utilize its proportional list like Reiwa-Shinsengumi to advance their female candidates. Instead, the LDP prioritized their list to recover seats lost in prefectural districts.

One of the final questions from the group focused on the future Japan-Republic of Korea (ROK) relations. Both Harris and Dr. Oros were in agreement that even after this election, relations between the two countries were not expected to improve, especially if Japan goes through with their intention to remove ROK from its white list of countries that face minimum trade restrictions. However, the future of Japan-ROK relations will be directly impacted by future ROK elections, depending on whether there is a government change. They both agreed it is a concerning issue, one that places the United States in an uncomfortable position if Japan-ROK relations are strained even further.