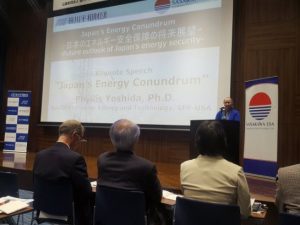 Following opening remarks from Sasakawa Peace Foundation Chairman Nobuo Tanaka, Dr. Phyllis Genther Yoshida, Sasakawa USA’s Senior Fellow for Energy and Technology, provided a keynote address at the start of the seminar. In her address, Dr. Yoshida outlined the objectives of the book and highlighted recommendations and key insights from the various authors. Dr. Yoshida noted that the interaction between energy and the environment is the most important challenge facing Japan’s energy policy, and drew attention to the ongoing debate on whether or not Japan should develop a civil nuclear power industry. While Japan can’t escape its energy conundrum, noted Dr. Yoshida, it can mitigate some of its energy concerns by adjusting its energy markets.

The second panel looked at “Japan’s energy security in the future,” and included contributor Dr. Robert Feldman of the Tokyo University of Science and Technology, Yasuyo Yamazaki of Sun-Based Economy Association, and Nobuo Tanaka. Tokyo University’s Dr. Hideaki Shiroyama moderated this panel. In his remarks, Dr. Feldman explained that although Japan experienced an energy “miracle” when it shut down its nuclear reactors but managed to keep greenhouse gas emissions at the same level, one miracle is not sufficient to resolve the country’s energy woes. Yamazaki proposed a plan for energy connectivity throughout Northeast Asia, while Tanaka focused on the need to learn from recent power outages and reform Japan’s electricity infrastructure.

The final seminar session was an engaging discussion between Tanaka and Dr. Birol. The discussion covered global energy issues more broadly and covered topics such as oil supply and demand; increased global greenhouse emissions at a time when targets are decreasing; and air pollution concerns in developing countries. According to Dr. Birol, some of these issues also present opportunities. For example, if developing countries switch to renewable and clean energy, air pollution will subside, improving life for citizens and reducing greenhouse gas emissions.

The seminar concluded with audience Q&A.