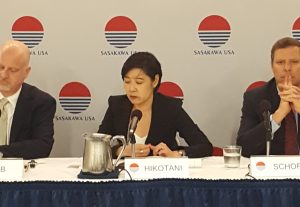 On Monday, October 23, 2017, Sasakawa Peace Foundation USA held a media briefing at the National Press Club in Washington, D.C. on the results of Japan’s October 22 snap elections. At the briefing, experts on Japanese politics and U.S.-Japan relations summarized the results of the elections and their impact on U.S.-Japan security and economic relations, Japanese politics, and the legacy of Japanese Prime Minister Shinzo Abe. The panel of experts was composed of Daniel Bob, director of programs and senior fellow at Sasakawa USA; Tobias Harris, fellow for economy, trade, and business at Sasakawa USA; James Schoff, senior fellow for the Carnegie Asia program at the Carnegie Endowment for International Peace; and Professor Takako Hikotani, Gerald L. Curtis Associate Professor of Modern Japanese Politics, and Foreign Policy at Columbia University.

The election was a success for Japanese Prime Minister Shinzo Abe, with two-thirds of the Lower House going to Liberal Democratic Party (LDP) and Komeito candidates. The results mean that Prime Minister Abe may potentially secure a third term, becoming the longest serving prime minister in modern Japanese history. Within the context of this win, the panelists discussed the significance for constitutional recognition of Japan’s Self-Defense Forces, Japans posture towards North Korea and China, the future of Abe-Trump relations, and the future of bilateral economic relations between the U.S. and Japan.

Daniel Bob kicked off the discussion with an overview of the election results and the key issues at play. According to Bob, the LDP’s claimed itscampaign was based on seeking a new mandate to rule and address domestic social concerns such as the aging population as well as the security threat posed by North Korea.

On the topic of the LDP’s success in this election, Tobias Harris suggested that the reshuffling of Abe’s cabinet following a summer full of scandals contributed to the win, as did Abe’s consistency with regional security concerns, and the weakness of opposition parties. Professor Hikotani then speculated that exit polls showed that voters were primarily concerned with domestic issues such as the economy, and less focused on security threats.

There was consensus among the panelists about the importance of the rise of the newly formed Constitutional Democratic Party (CDPJ). Professor Hikotani said that the CDPJ, as the opposition party to win the most seats in the Lower House, would be the primary party bargaining with the LDP. Harris additionally noted that the massive gains made by the CDPJ in this election spoke to the possibility of the eventual growth of a larger opposition.

The closeness of the Trump-Abe relationship did not deter voters from backing Abe.

Panelists also agreed that the U.S.-Japan alliance would remain stable after this election. The election of an LDP candidate in Okinawa, which typically elects opposition candidates, pointed to some desire for stability by the Japanese public, said James Schoff. Schoff also pointed out that while the Japanese public’s confidence in U.S. President Trump has declined, the closeness of the Trump-Abe relationship did not deter voters from backing Abe.

During the question and answer portion, panelists were asked about Shinzo Abe’s approach to North Korea, Abe’s economic plans for Japan, the future of Japanese opposition parties, and the potential for a bilateral U.S.-Japan free trade agreement, all of which led to an engaging discussion among attendees and panelists.

For more on this event, click here to read the media briefing. The event was also mentioned in an October 23 Foreign Policy magazine article, which you can read online here.