Japan’s Changing View of Collective Self-Defense: Past, Present, and Future 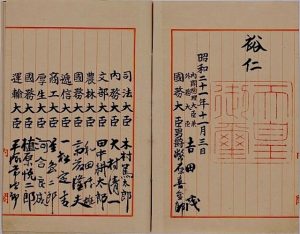 Sasakawa USA held an on-the-record policy lunch on Friday, September 15. The lunch focused on “Japan’s Changing View of Collective Self-Defense: Past, Present, and Future.” The discussion featured a talk given by Koji Murata, professor of political science at Doshisha University, and was moderated by Daniel Bob, director of programs and senior fellow at Sasakawa USA. The talk concluded with an open discussion with audience members, many of whom have extensive background in the subject.

During his talk, Professor Murata discussed the challenges that the constitution of Japan creates over Japan’s right to self-defense, whether collectively or individually. As set in the 1947 Constitution, Article 9 explicitly states, “the Japanese people forever renounce war as a sovereign right of the nation and the threat or use of force as means of settling international disputes.” As Professor Murata pointed out, since 1972 when Okinawa reverted to Japan, the interpretation of Japan’s constitution has been such that although Japan has the right of self-defense, it cannot exercise that right. This interpretation was challenged by Prime Minister Shinzo Abe and more hawkish forces in the Japanese government, and a new interpretation was made in 2014, which permits Japan to exercise its right to collective self-defense, although under strict limitations. Given rising tensions in East Asia, including North Korea’s growing missile and nuclear capabilities and China’s assertive maritime claims, the limits still faced by Japan on collective self-defense are problematic.

During the Q&A, Professor Murata and the audience discussed whether Japan should increase its defense capabilities by purchasing weapons from the U.S., and how that could impact Japan’s relations with China and South Korea. There was some doubt raised as to the immediate operational effect of such weapons, as it would take time to acquire them and Japan would most likely need American training to use them. How Japan and South Korea should deal with North Korea was also discussed, which in turn raised questions over the state of Japan-ROK relations. Professor Murata argued that the South Korean and Japanese governments must both pay attention to each other’s internal politics and public opinions, and should be wary of having fixed perceptions of one another that could limit Korean-Japanese cooperation in dealing with the threat posed by North Korea.