Japan and the United States as Global Leaders: Sasakawa USA and SAFE’s Leadership Tour to Japan in Energy and Innovation 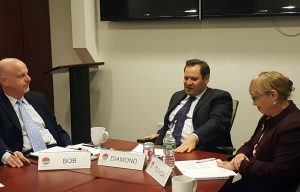 Speaking broadly about the trip, Diamond praised Japan’s focus on fostering innovation in technology development. Diamond also explained the importance of Japan making progress to develop new alternatives to fuel the energy economy, such as electricity and hydrogen fuel cells. Such progress could be made through U.S.-Japan cooperation.

Sharing her thoughts on the trip, Yoshida explained that while constantly impressed by Japan’s technology, Japan isn’t as far along in autonomous vehicles as the United States. Nonetheless, the two countries can work together to bridge the technology gap. Turning towards China, Yoshida noted that China is poised to become the largest electric vehicle market in the world.

The discussion was followed by questions from the audience on Japan’s shift from nuclear energy and more.