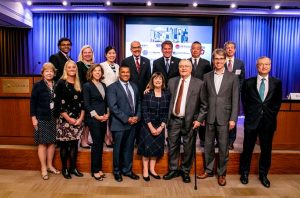 Japan is the world’s third-largest economy and remains one of the most reliable trade and investment partners for the United States. As two democracies accounting for 30% of the global economy, the United States and Japan could generate greater benefits for each other and beyond through closer cooperation. However, regional tensions are raising concerns about the economic stability in the region, and U.S. withdrawal from the Trans-Pacific Partnership has excluded U.S. businesses from preferential tariff and investment protections in Japan.

On September 18, 2019, Sasakawa USA and Global Minnesota sponsored a panel discussion, “Doing Business in Japan in Turbulent Times,” which covered these developments and opportunities for Minnesota companies despite the turbulence. The discussion covered a variety of topics, including Japan’s business climate, the U.S.-Japan relationship, trade tensions and treaties, as well as legal, tax, and accounting issues. Former U.S. Vice President and Ambassador to Japan Walter Mondale provided brief opening remarks.

This event was presented in partnership with Dorsey & Whitney LLP, Japan American Society of Minnesota, KPMG LLP, Minnesota Trade Office, and the World Affairs Councils of America. It was offered as part of Sasakawa USA’s The Alliance Working in America (TAWA) series. The TAWA series seeks to engage with regional leaders in cities across the United States on the importance of the U.S.-Japan alliance to U.S. interests, both at the regional and national levels. Previous TAWA programs have been held in Houston, Texas; Atlanta, Georgia; Oregon; and Kentucky.

This event was off-the-record, but Wendy Cutler’s keynote speech is available for viewing below. It includes brief opening remarks by former U.S. Vice President and Ambassador to Japan Walter Mondale.