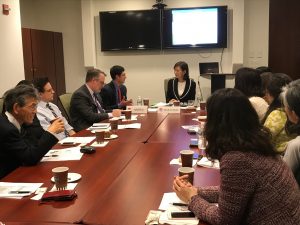 At this event, Makiyama shared her perspective as part of the opposition party on recent political developments in Japan, and presented on gender gaps in Japan and her policy recommendations.

The current parliamentary session was supposed to focus on improvements in the workplace, Makiyama said, but the Diet and Prime Minister Shinzo Abe have been distracted by many scandals. The issue of overwork, sometimes to the point of death, is a serious problem in Japan. To address this, the Diet has proposed a bill that would cap the work week at 100 hours, but it still doesn’t go far enough, in Makiyama’s opinion. “We aim for eight hours of work, eight hours of sleep, and eight hours of personal life. That seems to be a given in many countries, but in Japan that is quite rare,” she said.

Gender inequality has not been adequately achieved in Japan, Makiyama said, citing the World Economic Forum’s Gender Gap Index 2017:  Japan’s international gender equality rank has fallen from 111 to 114, despite the country being ranked No.1 in health and life expectancy. Japanese labor practices, which include long hours of work, long distance transfers, and an ingrained seniority system, work unfavorably to women needing to take maternity leave and managing childcare.

Although Japan’s ruling LDP party is looking to women to help grow the economy, particularly as Japan struggles with a declining birthrate, Makiyama believes their proposals focus too heavily on elite positions, rather than all working women. She’d like to see more women run for elected office, to help bring about a shift in social and gender policies–including wage disparity and work-life balance–which would be more favorable to women.

Makiyama’s presentation was followed by a Q&A discussion with the 20 attendees. The invitation-only event was held on-the-record.

Makiyama has represented Kanagawa Prefecture in the National Diet since 2007. She is a member of the Foreign Diplomacy and Defense Committee, Constitution Evaluation Committee, and Electoral System Specialists Committee.  She has held a number of positions including Director General of the National Rallying and Canvassing Department of the Democratic Party (including the management of the Women Politicians’ Network.); Cabinet Division Committee on Gender Equality and Childcare; and Committee Vice Chair (Womens’ Health Comprehensive Support).