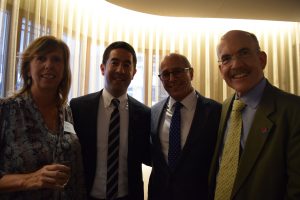 On August 30, 2018, as part of Sasakawa USA’s Alumni Program, Sasakawa USA partnered with the U.S. Association for Former Members of Congress – Congressional Study Group on Japan (FMC – CSGJ) to host 19 of our congressional alumni for a reception at Kaz Sushi Bistro. Alumni who joined us were former participants of CSGJ’s delegations to Japan and Weekend Asia Retreats in Baltimore or East West Center in Washington’s Congressional Program on Asia (CSPA), which are all sponsored by Sasakawa USA.

Following opening remarks from Ambassador James Zumwalt, CEO, Sasakawa USA, and Sabine Schleidt, CEO, FMC-CSGJ, experts Dr. Charles Boustany, Vice President, FMC, and David Nakamura, Staff Writer, Washington Post, each gave a snapshot on their current work in an off-the-record setting. This event was a great opportunity for our congressional alumni to network and reunite with each other and the experts who joined us, and to thank Dr. Boustany and Mr. Nakamura for their support of Sasakawa USA’s and FMC’s congressional programs.