China’s Strategic Perception of Japan: The View from Beijing 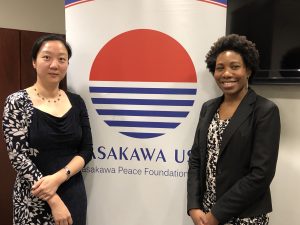 Yun Sun, Co-Director of the East Asia Program and Director of the China Program at the Stimson Center, was the guest speaker at Sasakawa USA’s February 6 Policy Lunch Series discussion on “China’s Strategic Perception of Japan: The View from Beijing.” The off-the-record discussion was moderated by Sasakawa USA Research Assistant Darah Phillip.

In her comments, Sun noted the complexities of Sino-Japanese relations, highlighting historical issues, the U.S.-Japan alliance, and other factors that have defined relations between Japan and China. During the discussion, participants also touched upon economy and trade issues in Northeast Asia and the tensions that exist between regional actors’ domestic and foreign policies.