Changes on the Korean Peninsula: Moon and Kim – Who Leads this Dance? 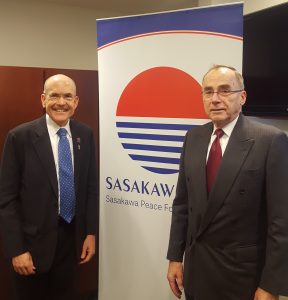 To answer the question raised in the title of his talk, Gregson remarked that Kim Jong-un leads the dance between the North and the South. Focusing on United States policy towards North Korea, Gregson noted that every U.S. administration since President Bill Clinton attempted similar responses to North Korea’s weapons program, all with poor results. For North Korea, developing nuclear weapons is lucrative and has led to summit meetings with the world’s superpowers. What incentive can we offer North Korea that would be more valuable, Gregson asked.

According to Gregson, the nature of the North Korean regime and power dynamics in East Asia have enabled the successes of North Korea’s weapons program. North Korea is run as a family-run enterprise, with a global network set up to support the Kim family and elite North Koreans. As long as this group continues to have access to financial resources, through both covert and overt revenue streams, negotiations with North Korea will have a minimal effect. In terms of regional dynamics, China’s ability to pressure North Korea is limited due to its historical support of the regime, said Gregson. Additionally, while there are some Asian nations who benefit from North Korean operations, North Korea’s deployment of the nerve gas VX in Malaysia in February showed that the regime is willing and able to attack critics and opponents throughout the region.

Returning to U.S. policy to address North Korea, Gregson asserted that the United States needs to maintain an effective deterrence policy that demonstrates a viable threat of punishment and denial of North Korean capabilities. He also emphasized the need for broad efforts to destroy North Korea’s support networks.