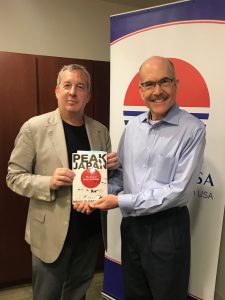 Glosserman began by explaining the impetus for his book. On March 10, 2011, he was in San Francisco, preparing to attend a panel discussion on current developments in Japan. He and his wife stayed up much of the night watching the damage and destruction unfold following the earthquake and tsunami that struck Japan that day on the other side of the Pacific Ocean. He was asked to assess whether the tragedy could force another “Meiji moment” on Japan as the government rallied its country around its fervent calls to rebuild. As that research progressed, it became clear that the March 11 “triple catastrophe” would not be the event to catalyze Japan and provide the impetus for the implementation of radical reforms the government (and others) had said were needed. Peak Japan is an attempt to explain that aversion to change, in it Glosserman concludes that Japan has reached the apogee of its political power.

Glosserman endeavored to make Peak Japan: The End of Great Ambitions accessible to all readers and “mercifully free of jargon.” The book is not meant to serve as an academic textbook, and readers do not need to be an expert in Japan or international relations to appreciate its contents. Glosserman also emphasized that he interviewed only Japanese sources and approached business leaders, civil society activists, and artists to “get away from the usual suspects.” Additionally, he conducted five roundtables with university students and visited Osaka, Fukuoka, and other cities throughout Japan to gain new perspectives from outside Tokyo. 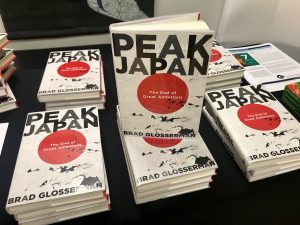 The first chapter begins with the oft-referenced 1868 Meiji Restoration and brings the reader through Japan’s history up to the precipice of the financial crash of 2008. The next four chapters lay out four “shocks” that Glosserman believed could have spurred growth and significant reform from Japan: the financial shock of the global recession in 2008, the political shock of the Democratic Party of Japan’s victory in 2009, the Senkaku Islands shock of deteriorating Sino-Japan relations in 2010, and the triple disaster shock of the Great East Japan Earthquake in 2011. He chose these four “shocks” as windows to explore Japan’s lost decades (generally thought to range from 1991-2010). The final two chapters address the return of Prime Minister Abe Shinzo to political power and examines his administration’s role in shaping Japanese foreign policy, economic reform, and national identity. Glosserman also emphasized that he doesn’t offer explicit recommendations for Japan in his book to avoid the frequently criticized tendency of Americans telling Japan what to do.

To explain why Japan has reached its peak of its political influence, Glosserman admitted that the easiest rationalization comes down to the extreme aversion toward risk among Japanese, the presence of debt and severe demographic issues, and an ossified political system. However, he believes the key lies in attitudes, and especially important are differences across generations as it would be inaccurate to portray Japan as a monolithic society. Japanese are extremely proud of the unique political economy that they’ve created yet they are being encouraged to change that system with no promise of better outcomes. To illustrate this point, Glosserman shared anecdotes from young Japanese students he interviewed for his book. One young woman said that the only Japan she’s ever known is a country that has been in stagnation and decline her whole life, yet it remains a beautiful, rich, and comfortable country. Another young Japanese mentioned that their Chinese and Korean friends have to work much harder in a more competitive environment in their countries. Glosserman surmised that Japanese youth are inclined to keep their head down and not rock the boat to maintain their quality of life and future prospects. Additionally, young Japanese watched as their parents struggled on behalf of their nation but are now not noticeably happier for their efforts and sacrifices.

At the conclusion of his opening remarks, Glosserman voiced a warning for U.S.-Japan relations: A strong U.S.-Japan alliance is critical to the region’s stability and the world’s, but not all Japanese people are unified behind Prime Minister Abe’s redefined security vision for Japan. He believes there is a real danger of Washington, D.C. holding inflated expectations of what Japan will offer the United States if called upon in a crisis. 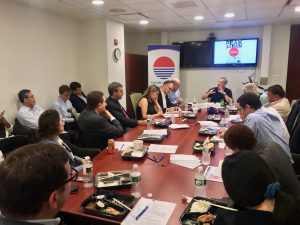 In the following Q&A discussion, Sasakawa USA CEO Ambassador James Zumwalt fielded multi-part questions about the future of Japan, the attitudes of young Japanese, and implications for the U.S.-Japan relationship. Regarding the trajectory of Japan’s future, Glosserman clarified that while he believes Japan has reached its “peak,” the actual slope of its decline is unclear. The coming decades could manifest as a sort of economic and societal plateau for Japan, or there could be a steep decline with an unknown economic trigger. When asked to clarify his thinking about the attitudes of younger Japanese, he noted that the images of what constitutes a good life for young Japanese have shifted compared to their parents and the idealized family size has changed. Moreover, the business culture in Japan has not transmitted its long working hours and sacrificial ethos to younger generations. He also highlighted the struggle of women in Japan, stating that women face an extraordinary set of obstacles and have to work harder and be smarter to reach the same success as their male counterparts. As for U.S.-Japan relations, Glosserman stated that the Japanese understand that the alliance is their best security option, and will never break the existing alliance. He also applauded Tokyo’s attempt to use its status as a middle power successfully in the face of increasing geopolitical competition in its region. The best example of this phenomenon is Japan filling in the vacuum created by the United States when it left the TPP agreement, leaving Tokyo to lead the new Comprehensive and Progressive Agreement for Trans-Pacific Partnership (CPTPP).

At the close of the event, Glosserman took the opportunity to reiterate that the most significant issue in Japan is attitudinal. Although he doesn’t believe Japan will experience another big “Meiji shift,” he wondered if Japan will be able to maximize its strengths to keep its place in the world. He thinks Japan’s strengths are undervalued and the government prioritizes the wrong objectives. Ultimately, change could come from cultivating a culture of innovation and dissent that would work against complacency in maintaining the status quo.