A Turning Point with North Korea?: Regional Perspectives on the U.S.-North Korea Summit 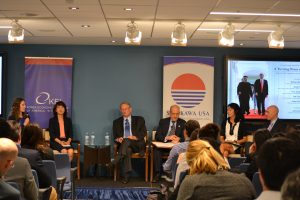 The panel evaluated the historic summit between President Donald Trump and North Korea’s Chairman Kim Jong Un. “North Korea’s nuclear threat is still very much there since we haven’t seen any concrete indications about denuclearizing North Korea from Kim Jong-Un himself,” Tatsumi said. Newcomb added that DPRK’s intercontinental ballistic missiles and their weapons of mass destruction, such as chemical and biological weapons, still remain. Park said the fact that two leaders who were hostile towards each other met is very important, and this summit is the beginning of new opportunities for their relationship. Stangarone briefly mentioned that from here there may be a long process requiring negotiation of details and implementations.

Most of the panelists were surprised by the Trump’s announcement of the suspension of U.S.-ROK joint military exercises. Newcomb emphasized that militaries need to be trained, and that trainings are not “war games.” Zumwalt was also surprised by Trump’s comment that exercises are expensive, because that signals that the United States is no longer as committed to its alliances because of the cost. Park explained Trump’s dual goals of providing security assurances for North Korea and dealing with burden-sharing issues with South Korea.

During the question and answer session, when asked if U.S-ROK military exercises are provocative, Tatsumi raised concerns about Trump’s announcement of the suspension without consultation with Seoul and Tokyo. When asked about whether bilateral or multilateral talks are more effective, Zumwalt answered that it is crucial to coordinate with other players such as Japan and South Korea since both will pay for denuclearization. Stangarone added that Russia and China should be included in negotiations with North Korea.

View a video of the event below: