A Conversation with Yoriko Kawaguchi 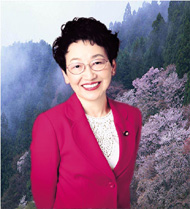 orable Yoriko Kawaguchi served in the Koizumi cabinet as Minister for Foreign Affairs from 2002 to 2004 and as Minister for the Environment from 2000 to 2002. Currently a Visiting Professor at Meiji Institute for Global Affairs, she was also Special Adviser on Foreign Affairs to the Prime Minister of Japan from 2004 to 2005 and a Member of the House of Councillors from 2005 to 2013. In addition, she has served as Co-chair of the International Commission on Nuclear Non-Proliferation and Disarmament from 2008 to 2010, as Managing Director of Suntory Ltd., Director-General of Global Environmental Affairs at the Ministry of International Trade and Industry, and Minister at the Embassy of Japan to the United States. Ms. Kawaguchi holds an M.Phil in Economics from Yale University and a BA in International Relations from the University of Tokyo. In 2008, Ms. Kawaguchi was awarded Yale’s Wilbur Cross Medal.