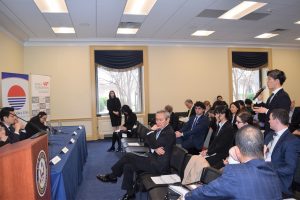 The 7th U.S.-Japan-Korea Trilateral Symposium brought together students and current professionals in the field of U.S.-Asia relations to enhance trilateral cooperation between the United States, Japan, and the Republic of Korea. The event aimed to both educate and to give the future generation of all three countries a voice regarding the promotion of peace, stability, and prosperity in the Asia-Pacific region. The symposium was held January 10, 2020, on Capitol Hill in Washington, D.C.

The panels, “Forming Opinions, Shaping the Future: The Impact of Social Media on U.S.-Japan-Korea Relations” and “The Future of U.S.-Japan-Korea Trilateral Relations: Challenges and Prospects” created a timely discussion between motivated student leaders and distinguished professionals, showcasing the younger generation’s enthusiasm for cooperative and active trilateral engagement.

Panel I: Forming Opinions, Shaping the Future: The Impact of Social Media on U.S.-Japan-Korea Relations

The panel addressed how social media plays an increasingly significant role in both public diplomacy and citizen discourse. The discussion highlighted the manifold consequences of the social media-news intersection: increased active citizenship, new fora for interaction with policymakers and lawmakers, and dangers of disinformation, hate speech, and biased, curated news feeds.

Both JASC and KASC Executive Committee Members extolled the virtues of increased accessibility to news and promoted technological development towards translation of different foreign outlets for access to perspectives outside their respective countries. They also recognized the threats from proliferation of social media news—with political polarization being more of a problem in Japan than disinformation.

In the Q&A session, panelists delved into themes of youth media consumption and effects on political participation and voter turnout, and efforts by the U.S. State Department to counter disinformation via the recently established Global Engagement Center. The session also featured a debate around whether easier access to news and information livened or worsened discourse about political issues in the United States, Japan, and Korea.

In addressing “prospects,” the panelists discussed opportunities for greater collaboration given an increasingly illiberal Chinese state. Panelists recognized that, while the three countries may have friendly and productive relations in the short-term in the face of North Korean aggression, the long-term issue of Chinese encroachment requires greater coordination among the allies. The discussion addressed the importance of improved trilateral relations for engagement in proactive norm creation and rule-setting in the Asia-Pacific region, as well as to fortify ties among future leaders. Panelists agreed that, in pursuit of trilateral cooperation, it is important not to get bogged down in political distractions such as burden-sharing debates.

The panel pointed out the barrier to greater trilateral cooperation lies in the U.S. predicament in managing the alliance—i.e. sacrificing identity-based historical memory issues for the security guaranteed by the trilateral relationship. The ramifications of this dilemma manifest themselves in the current status of Japan-Korea relations imbued with distrust and misperception. Panelists stressed the need for more ministerial-level meetings and statesmanship between the three countries, as well as incorporating the Republic of Korea in the Free and Open Indo-Pacific vision.

Student panelists advocated for increased U.S. leadership in managing the alliance and in taking a more active approach to settling historical issues between Japan and Korea. They also echoed sentiments about the need for continued engagement from Congress—particularly facilitating international student dialogue.