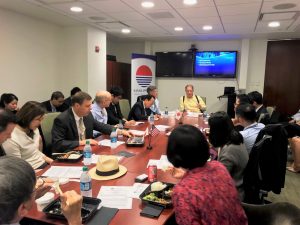 Sasakawa USA’s policy lunch series aims to explore critical issues impacting Japan and the U.S.-Japan relationship. As it has become clear that 5G cellular networks will become a critical part of the world’s telecommunications and digital data transmission infrastructure, there is a need for greater coordination and dialogue between the United States, Japan, and Europe to mitigate its security risks. In this policy lunch discussion, Roth explored the current realities and challenges of 5G networks in the United States and the world, the recent U.S. sanctions against Huawei, and whether Huawai or other Chinese companies are the problem or a symptom against a greater systemic threat.

Roth began the discussion with an overview of 5G as a next generation cell phone network technology and gave an explanation of its recent developments and challenges. As 5G would have to rely on the existing facilities of 4G network, Roth cautioned that the United States will not be able to make use of the full potential of 5G network during its transition although pilot programs are already in operation in the country as well as in Korea, Japan, France, Germany, and elsewhere. Additionally, American manufacturers are unable to build 5G cell towers and other equipment independently. The United States will need to rely on foreign manufacturers such as Nokia, Ericsson, ZTE, and Huawei to construct certain domestic infrastructures.

The recent headline news of U.S. sanctions against a single Chinese company, Huawei, also dominated the discussion. Roth delved into America’s fears over Huawei and also shared other world reactions to the company’s aggressive business tactics. Roth discussed the threats posed by Huawei, including its early history of intellectual property theft, its sponsorship by the Chinese government, and its undermining of sanctions on Iran. In New Zealand, Australia, United States, and Japan, Huawei equipment is banned from at least government networks.

However, the United States’ targeted sanctions against a named company is also unusual and sets a difficult precedent, according to Roth. Whomever provides facilities, the unprecedented level of integration among networking, computing, and storage resources for 5G would pose security threats regardless of country origin. An integrated 5G network will most likely contain foreign equipment, which could be the target of manipulation. He posited that Huawei is just one example of a systemic problem inherent in 5G technology and that there is a “bigger problem” that needs to be addressed. As a possible solution, Roth discussed the potential for the United States and Japan as well as other allies to develop a common strategic review of 5G equipment that looks at both the security of devices and the potential for manipulation of 5G manufacturers by adversaries.

During the subsequent Q&A discussion, Roth and other participants assessed the potential of the United States’ 5G technology, the challenges presented in coordinating vetting processes with allies, and the possible polarization of the world’s 5G network between countries which use equipment provided by China and the United States and its allies which reject it. Roth sees U.S. sanctions on Huawei as a good opportunity for American companies and European allies to reconsider whether they should diversify their sources for materials. Ultimately though, Roth warns if the sanctions on Huawei are too stringent, the United States could lose any chance to cooperate with the allies to counter China.