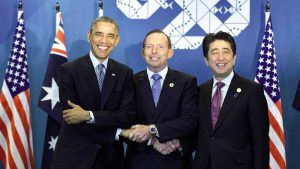 In the context of an increasingly challenging maritime domain in the Asia-Pacific region, Japan, Australia, and the United States have been strengthening their trilateral maritime relations. On June 27, Sasakawa USA, in partnership with the Strategic and Defence Studies Centre at Australian National University and the Command and Staff College of the Japanese Maritime Self-Defense Force, convened a public forum in Canberra, Australia to discuss the current status of this important trilateral maritime relationship and explore means for further strengthening and future cooperation.

The maritime security interests of the United States, Japan, and Australia overlap in the Western Pacific and East Asia. All three countries are trading nations and have strong interests in the free flow of commerce on and above the oceans, and in the full range of maritime rights and responsibilities in the UN Convention on the Law of the Sea. But this does not mean that their maritime security interests are necessarily congruent. American interests are strongest in the Northwest Pacific and extend into the South China Sea as well as the Southwest Pacific. Japan’s maritime interests are more localized to the sea areas around its island nation, but that is a large stretch of water, from the Bering Sea to the Bashi Strait. Australia, for its part, is most deeply concerned with the waters between its northern coast and the Indonesian archipelago whilst maintaining security relationships with many island nations in the Southwest Pacific, and security interests in the waters around them.

A network of maritime cooperation activities among the United States, Japan, and Australia has existed for many years. The military component has traditionally been based on bilateral relationships, but through exercises such as RIMPAC has become more multilateral in character. Trilateral military consultation and exercises have been episodic. Beyond the military sphere, the three countries share an interest in patrolling their large exclusive economic zones and long coastlines to prevent illegal activities. In addition, they understand the importance of the world’s oceans in regulating the global climate, and in the importance of further oceanographic research to better understand overall climatic effects as well as local destructive weather coming from the sea.