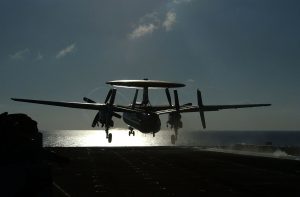 On a recent trip to East Asia, the subject of steadily increasing Chinese maritime and air activity in the waters and airspace of Japan and Taiwan came up often. China’s Navy and Air Force are growing in number and sophistication of platforms, and China has been sending ships and aircraft in increasing numbers through international waters around both Taiwan and Japan, through their Exclusive Economic Zones (EEZ), Air Defense Identification zones (ADIZ), contiguous zones, and even territorial waters and airspace. Both Japan and Taiwan interpret this Chinese activity as a threat, and intercept every Chinese airplane or ship as it approaches these zones, and escort them throughout their flight or voyage. Both Taiwan and Japan publish the number and location of these Chinese activities as they occur and in statistical accounts every year.

Although this intercept and escort policy seems a sensible way of protecting a country’s sovereignty, demonstrating that a country’s armed forces are on their guard and can defend their territory, it comes at a cost in military effectiveness. “Scrambles” of alert aircraft to intercept Chinese aircraft and rapid sorties of alert surface ships to intercept Chinese ships are simple tactical evolutions that provide little training value in wartime skills. The pattern of reactions provides intelligence insights to the People’s Liberation Army (PLA) about Japanese and Taiwanese surveillance and reaction capabilities, insights that can be used to the PLA’s advantage in combat operations. The budget effects of these “intercept and escort everything” policies are more important. They use up flying and steaming hour budgets, leaving less money available for complex exercises to hone more difficult skills that will be needed in wartime. Within limited defense budgets, purchasing replacement or additional aircraft and ships for intercept and escort competes with the purchase of larger inventories of long range surface-to-air missiles, submarines, or other systems that are of greater utility in defeating Chinese attempts to take and hold islands.

In other words, Japan and Taiwan, with their “intercept everything” policies, are degrading their readiness to defend their territory in conflict, lowering deterrence of Chinese military aggression.

How can these policies be changed without appearing as a weakening of resolve and capability?  The military leaders of both Japan and Taiwan are under strong political pressure to intercept and escort every Chinese sortie near their territory. China should not be able to operate freely around Taiwanese or Japanese territory. Neither should China be able to dictate how Japan and Taiwan allocate their defense budgets.

A first step is for both Taiwan and Japan to decide how much of their Navy and Air Force operating budgets should be spent on intercept and escort operations, and how much should be spent on training for wartime missions. There is no correct proportion, but intercept and escort operations should consume only a small fraction of navy and air force training budgets, say ten per cent.

A second step is for both Taiwan and Japan to remove intercept and escort as a separate mission to justify force acquisition decisions. Ships and planes and sensors and weapons should be purchased for their wartime usefulness, not for peacetime activities. Both Japan and Taiwan need fighter aircraft and surface combatants for wartime missions, but it is a waste of scarce resources to purchase replacement or additional units for intercept and escort operations.

A third step is for Japan and Taiwan to make new policies for intercept and escort. Under these new concepts, Japan and Taiwan would not automatically intercept and escort all Chinese flights and voyages near their waters. They would be selective and unpredictable, not revealing their full capabilities but demonstrating that they are closely following Chinese activity and can intercept it if they choose to do so.

Additionally, Japanese and Taiwanese defense leaders need to educate the public in their respective countries about the new policy and about the difference between military operations in peacetime and in conflict. The public needs to know, for example, that all countries, including China, under international law can operate their ships and aircraft in international waters in peacetime. They need to know that Japanese and Taiwanese ships and vessels also have the right to operate freely in waters and airspace close to China, and that no country owns international waters and air space beyond 12 miles from its shores.

To emphasize this point, Japan and Taiwan should send some of their own ships and aircraft on occasion into international waters closer to China. China will react with its own intercept and escort operations, as they do with American air and surface ship operations near China. China will respond publicly with denunciations of the Japanese and Taiwanese operations as “hostile and threatening,” while insisting that their own similar operations are peaceful and pose no threat. The contradiction will not be lost on Taiwanese and Japanese citizens.

Taiwanese and Japanese citizens also need to know that countries can operate their ships and aircraft in peacetime in locations that would not be possible in wartime. To drive this point home, Japanese and Taiwanese forces can use Chinese operations around their waters to exercise wartime skills. Several months ago, the refurbished Chinese aircraft carrier Liaoning made a cruise around Taiwan, a subject of major political concern in the Taiwanese press. If the Liaoning makes a similar voyage in future, Taiwanese forces should take advantage of its presence to conduct simulated attacks against the Liaoning, raising their own readiness, and demonstrating the reality that the Liaoning is vulnerable under wartime conditions.

Finally, the public in Taiwan and Japan needs to know that it is wartime military capability, not peacetime operations, that deters a potential aggressor like China from taking action to enforce the claims it makes on Taiwanese and Japanese territory. Chinese operations in peacetime near Taiwan and Japan are gunboat diplomacy, intended to intimidate and to cause concessions without conflict. Taiwanese and Japanese citizens need to understand that it is the capability of their defense forces to defeat Chinese aggression in wartime that provides the ultimate protection for their sovereignty and independence.