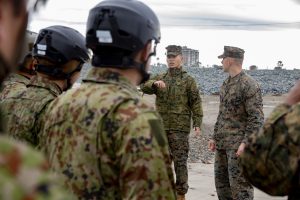 In December of last year, Japan published its third National Defense Program Guidelines (NDPG).  These guidelines, written under the supervision of the five-year-old National Security Council Staff, provide guidance for the development of Japan’s defense capability for the next decade.

Earlier this month Sasakawa USA held a conference on these guidelines (a video of the conference is on our website), and the consensus of the Japanese and American expert participants was that the guidelines were a glass both half full and half empty.

Although there are many positive features of the NDPG, they are inadequate in the very important area of achieving joint operations by the Self Defense Force. NDPG documents are always the tip of an iceberg, indicating the presence of much more substance unseen below the water line. However even tips of icebergs indicate overall direction and speed. The 2019 NDPG show a positive direction for Japanese joint capabilities, but the speed is disappointingly slow, much too slow for the security environment that the document itself accurately describes.

Even though they establish security policy for ten years, the guidelines do not set definite deadlines to achieve important joint operational capabilities. By 2029 the Japan Self Defense Forces must be capable of operating in multi-Service task forces under joint doctrine, with interoperable command, control and communications systems, with trained headquarters staffs and operational units skilled in operating with those from other services. The armed forces of many other countries grow weary of American adjurations concerning jointness, and sometimes dismiss them as mindless dogma. On the contrary, joint operations are a means to achieve greater military effectiveness from individual service capabilities when they operate in the same battle space. Integrated joint forces are the only way to combine the firepower of individual army, navy, and air force elements at crucial times and places across the entire battlespace. Forces without joint doctrine, training, communications, and attitude must play the equivalent of a zone defense in football or basketball and can be no stronger against a joint opponent than their weakest sector.

Interestingly, China is not one of those countries that resists the imperative of developing a joint operational capability. It has been making serious strides in transforming the PLA from an Army-dominated defensive force to a Navy and Air Force-led joint force on its eastern, maritime borders. Unless Japan makes the decision to embrace joint operations, it will face an opponent not only with superior resources, but also with superior warfighting doctrine and capability.

There are three specific areas in which the NDPG should have directed the development of joint task forces and operational concepts:

Aircraft and surface-to-air missiles have engagement envelopes of hundreds of miles. The NDPG states that all three of its services will have air and missile defense units:

In the tight battlespace around Japan, engagement zones of the aircraft and missile systems of the three different services will all overlap. Yet on the question of how these service units will be integrated into a joint missile and air defense force that can operate from a single common operating picture, that can be directed by a single commander against incoming missiles and aircraft, the document is frustratingly vague:

“SDF will establish a structure with which to conduct integrated operation of various equipment pieces, those for missile defense as well as air defense equipment that each SDF service has separately used.”

What the NDPG should say is something like the following:

“By 2024 the SDF will establish a joint task force to defend Japanese territory from air and missile attacks.”

If there is any military operation that must be joint to be effective, it is an amphibious assault. There must be one commander who controls the naval and air forces to win air and maritime superiority before the landing force can launch, the same commander must direct the amphibious ground force that makes the landing and consolidates the beachhead, and the air and naval fires that support the ground forces once ashore. History is littered with stories of defeats caused by divided command of these complex operations, in which naval, army and air commanders failed to integrate their actions.  Unified command is essential.

“GSDF will strengthen its ability to deter and counter threats by taking measures including: persistent steady-state maneuver such as coordinated [emphasis added] activities between ships and Amphibious Rapid Deployment Brigade and other mobile operating units as well as their various training and exercises.”

What the NDPG should say is:

“By 2024 the SDF will develop joint amphibious assault doctrine and procure necessary equipment to establish a joint operational command for amphibious assaults to recover remote islands that have been captured by an enemy force.”

The two joint task forces recommended above are tactical commands to deal with specific current threats and contingencies. There is a larger question of joint organization that Japan should have addressed in the 2018 NDPG.

Every advanced, large defense force except Japan has established joint operational commands with the responsibility for planning and training for known contingencies and developing the capability to react to surprise contingencies. All other nations have learned over time that individual service headquarters and even joint headquarters located in the capital cannot maintain the necessary operational focus. These headquarters staffs are consumed by questions of budget, personnel, equipment procurement, and responding to political authorities. While no country has the huge American joint command structure of regional and functional commands, they all (except Japan) assign the responsibility for planning, training, and conducting military operations to a separate staff, operating under the direction of political authorities, generally a ministry of defense. The services, in turn, are responsible for organizing, training, and equipping service units which are then assigned to joint operational commands for training and operations. Yet the NDPG states:

This tentative guidance will ensure that Japan continues to rely on cooperation among its service units, rather than welding them into a joint task force that can take full advantage of their capabilities. What the NDPG should have said is:

“By 2024 the SDF will establish a joint operational command reporting to the Minister of Defense through the Chief of Staff, Joint Staff, to plan and exercise for the following contingencies: major disasters such as earthquakes and typhoons, Japan’s military actions in regional conflicts involving Taiwan and the Republic of Korea, and defense of Japan’s remote islands against attack. The joint operational command will be co-located where possible with the U.S. joint command that has responsibility for responding to the same contingencies.”

Press reports indicate that Japan is actually taking action to establish joint capabilities and organizations faster and with greater urgency than the vague language of the National Defense Program Guidelines. Perhaps the NDPG are written in such a tentative manner to avoid political controversy.  However vagueness carries its own risks:  Officers within the self-defense services will continue to resist the establishment of joint commands, with the perceived loss of service prerogatives; the Japanese public will not be prepared for joint operations when the need becomes even more glaringly obvious; most dangerous of all, Japan’s potential enemies will be overconfident that they can take advantage of Japan’s weak joint structure to conduct quick and successful aggression against Japanese territory and interests.  Prime Minister Abe has made historically important steps to improve the effectiveness of Japan’s self-defense forces, but establishing a joint operating structure remains unfinished business.