Chairman’s Message: Trump’s trip to Asia and fundamentals to consider in a high stakes environment 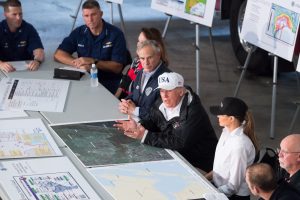 President Trump leaves this weekend for his first trip to Asia, with an initial stop in Japan. His top national security cabinet officers Jim Mattis and Rex Tillerson have had several productive visits already, so the President has a good foundation on which to build. There is a full U.S.-Japan security, economic, and diplomatic agenda for the President and Prime Minister Abe.

Dealing with North Korea is at the top of the agenda both in Japan and at subsequent stops in South Korea and China. Although the last North Korean missile and nuclear weapon tests occurred in September, new tests might take place during the upcoming visit. The most dangerous provocation that North Korea has threatened is a nuclear missile test firing into the Pacific Ocean.

The President and his team need to keep a few fundamentals in mind during the visit. Keeping our alliances with Japan and South Korea strong for the long term is as important as handling any current crisis with North Korea. This means frequent and close consultation with those countries, not unilateral American decisions followed by notification of the allies. So far, the diplomatic and economic measures against the DPRK have been developed and implemented in full consultation and coordination.

If North Korea does in fact launch a nuclear missile into the Pacific, the reaction should be a massive American and South Korean air and missile strike against all known DPRK nuclear test facilities and missile launching and support facilities. The strike should be launched from South Korean and Japanese bases, as well as U.S. ships and bases in the United States. Now is the time to consult with Japan and South Korea about this possibility as well as responses to other potential DPRK provocations. To launch a retaliatory strike of such scope, all three countries will need to increase their military readiness in case of North Korean retaliation and take steps to provide civil defense in South Korea and Japan to protect their citizens and the tens of thousands of Americans who live in both countries.

However, North Korea should not be the only security issue on the U.S.-Japan agenda during the President’s visit. The President needs to reconfirm that the American nuclear guarantee protects Japan in the case of a North Korean nuclear attack, and that Article IV of the 1960 Treaty of Mutual Cooperation and Security applies to the Senkaku Islands in case of aggression by China. For his part, Prime Minister Abe needs to reconfirm that under the new interpretation of collective self defense, Japanese forces have the authority to assist the United States and its military forces in certain contingencies such as a North Korean attack.

The South China Sea has been quiet recently, without aggressive Chinese moves. Beyond communiques calling for peace, the two leaders and their staffs need to discuss a carefully coordinated diplomatic, economic, and military program to support Vietnam, Malaysia, and the Philippines, and synchronized deployments of U.S. and Japanese forces to the region for exercises to assert the international character of the sea and air space.

The President and the Prime Minister need to articulate their vision for the Asia Pacific region.

The economic relationship between the United States and Japan is under tension due to an American desire to lessen its bilateral trade deficit with Japan and a Japanese determination to update multilateral trade practices in the Asia Pacific region by pursuing a Trans-Pacific Partnership after the U.S. withdrawal that would including the 11 remaining countries, in part to offset Chinese economic influence in the region. The bureaucracies in both countries need a signal from the two leaders that they understand each other’s objectives and will approve plans that work towards both goals.

Perhaps most important, the President and the Prime Minister need to articulate their vision for the Asia Pacific region. President Xi provided his concept at the recently concluded party congress, and it is one that over time places an authoritarian China at the center of Asian affairs. Most other Asian countries find that vision more frightening than reassuring, and they look to the United States and Japan for a better alternative. The two most powerful democracies in the region need to describe a future for the Indo-Pacific region that is secure, peaceful, prosperous, and free.