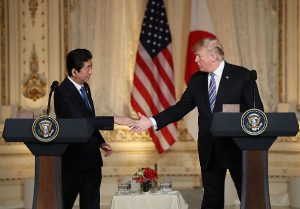 I recommend a careful reading of the formal communique of the summit meeting, rather than press reporting, or even the transcript of the joint press conference of the two leaders.  Communiques for summit meetings are drafted with care in consultations between the staffs of both delegations and approved by the heads of state. They represent the considered results of the meetings, drawing on the overall relationship between the countries and the issues they face together. The communique from Mar-a-Lago shows clearly that the U.S. and Japan are united on the big security issues that both countries face.

Note the contrast between the media, the press conference and the communique on the overall results of the summit. Roll Call’s summary analysis was headlined, “For Trump, Wins and Losses During the Abe Summit.” The New York Times stated: “the Japanese public is wondering whether their leader . . . might return to Japan with the diplomatic equivalent of an “All I Got Was This Lousy T-shirt.”  The President, for his part, began his statement to the press by praising Barbara Bush, the troops that made the strikes on Syria, his warm welcome in Japan last year, and his own North Korea policies. In fairness, the President did go on to say, “Our discussions today reaffirmed the close cooperation between the United States and Japan on the issue of North Korea and our common defense.”

The communique begins with a strong and comprehensive statement: “On April 17-18 at Mar-a-Lago, President Donald J. Trump and Prime Minister Shinzo Abe held their third meeting and affirmed their strong determination to strengthen our shared resolve on North Korea, and increase the capability of the U.S.-Japan Alliance to confront all emerging threats to peace, stability, and an international order based on the rule of law.”

What about North Korean denuclearization?  Several newspaper articles reported the fears of some in Japan that the United States would make concessions to North Korea in return for empty gestures; that it would strike a deal with North Korea to eliminate ICBMs that threatened the US, leaving untouched the shorter-range missiles that threaten Japan. The President in his press conference mentioned his commitment to denuclearization several times, but said nothing about ballistic missile programs.

In contrast, the communique’s second paragraph confirmed both leaders’ commitment to a “permanent and verifiable denuclearization of North Korea, and reaffirmed that “North Korea needs to abandon all weapons of mass destruction and ballistic missile programs.”

Then there were the differences on trade. The New York Times wrote, “Trump, Abe Fail to Agree on US Tariff Exemptions.” The Associate Press headlined its summary of the talks “Trade Issues Expose the Limits of Trump-Abe ‘bromance.’” The President talked about trade in the press conference. In response to a question, he said “Right now we have a deficit [with Japan] that’s a minimum of $69 billion a year. Japan sends us millions and millions of cars, and we tax them virtually not at all. And we don’t send so much product because we have trade barriers and lots of other things. So these are the things that the Prime Minister and I are going to be discussing over the next short period of time.” This was right after the Prime Minister had said in his response, “So on the U.S. side, that they are interested in a bilateral deal, we are aware of that. But at any rate, our country’s position is that TPP is the best for both of the countries. And based on that position, we shall be dealing with the talks.”

The communique was more balanced. It noted President Trump’s concern about the bilateral trade deficit, and announced further “consultations for free, fair, and reciprocal trade and investment” under the US-Japan Economic Dialogue. The communique emphasized both countries’ commitment to an open international trading system, committing “to coordinate enforcement activities against unfair trade practices by third countries.”

Finally, consider the treatment of China. Virtually the only media reporting on Chinese issues emphasized President Trump’s effusive praise of Party Secretary Xi during the press conference. The Financial Times was typical.

Largely unreported in the media, and the press conference, the communique addressed in detail the many issues on which Japan and the United States are cooperating to oppose China:  unfair trade practices, sub-standard infrastructure projects, militarization of the South China Sea, the application of Article V of the U.S.-Japan Treaty to the Senkakus, and increased military cooperation. These issues, in fact, take up about 40 percent of the communique, roughly five times the space devoted to trade issues.

Newspaper reporters over report controversy and under report solid consistent policy. When leaders stand up in front of a microphone, they know they are speaking to many audiences, at home and abroad, and they attempt to satisfy as many of them as possible. In contrast, communiques represent the considered positions of countries. The statement from the latest U.S.-Japan summit this week gives a clear picture of the policies of two of the three most powerful countries in the world working out the issues between them and united on the challenges that both face.