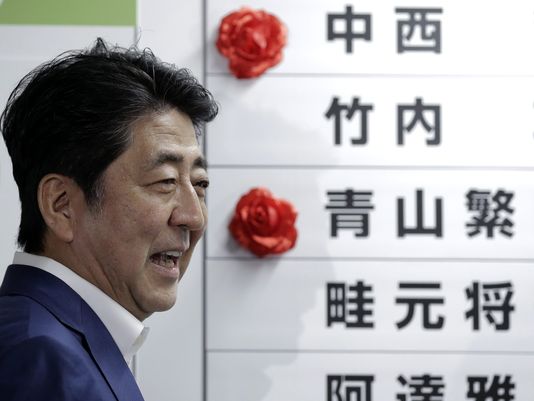 At the bottom of the Sasakawa USA homepage is our Japan Political Pulse feature, showing the trend of Prime Minister Shinzo Abe’s approval and disapproval ratings. In recent weeks the gap in the government’s favor has been at a very high level, and on July 10 it scored a major victory in the Upper House election. There were some unusual results, including two sitting members of the cabinet losing their races. However, with 18-year olds voting for the first time, and a record number of women winning seats, the Liberal Democratic Party prevailed decisively.

During his three-and-a-half years in office, Prime Minister Abe has often spent down his political capital on difficult initiatives that he believes are the right thing to do. Many of them have been important for the U.S.-Japan relationship. The new state secrets law, passed in 2013 and taking effect in 2014, made closer military and intelligence cooperation possible between the United States and Japan. The 2015 legislation to implement the new U.S.-Japan defense guidelines—and the constitutional reinterpretation permitting Japan to exercise its right to collective self-defense underlying the guideline—has made it possible for the Japanese Self Defense Forces to counter attacks on American units in certain instances. These initiatives were controversial and lowered the government’s approval ratings, but were ultimately successful.

The most pressing issue for Japan is implementation of the third arrow of Abenomics, and that is where the Prime Minister should begin spending the political capital he has accrued as a result of the recent election.

There is no shortage of difficult immediate issues that will require expenditure of political capital for Japan and the United States. Foremost is the Trans-Pacific Partnership (TPP), a trade agreement that goes well beyond lowering tariffs to include issues such as labor laws, environmental standards, and intellectual property protection— in ways that benefit all countries party to the agreement. Both Japan and the United States have signed the TPP. It was not an issue in the Japanese Upper House election, but it has become tangled in the U.S. presidential campaign. It will require spending down political capital in both countries for passage by their legislatures. If either Japan or the United States fails to pass implementing legislation for TPP, the agreement’s rules prohibit it from going into effect. A second issue is relations with China. The need for the U.S., Japan, and other countries to firm deal firmly with Chinese gray-zone aggression in the East and South China Seas, coupled with Beijing’s strong reaction to the adverse opinion it received earlier this month from the Permanent Court of Arbitration in The Hague in a case brought by the Philippines over disputed territories, will lead segments of the public in both Japan and the United States to fear the emergence of conflict. Finally, the completion of the construction of a rotary-wing base in Henoko, Okinawa, which just resumed last week, will be politically difficult for the Japanese government.

The most pressing issue for Japan is implementation of the third arrow of Abenomics, and that is where the Prime Minister should begin spending the political capital he has accrued as a result of the recent election. Progress on difficult structural reforms in labor supply and mobility, services, agriculture, and health care has not yet been substantial enough to ignite growth. TPP’s implementation will provide impetus for some of the necessary reforms, but Japan should not wait until then to make changes that will lead to long-term benefit despite short-term political pain. Strong Japanese economic growth is in the interest of the United States as the two countries face a host of challenges in East Asia; it is also in the interest of the global economy at a time of declining growth in China, Europe, and other parts of the world.