The 2021 Election and Democratic Representation in Japan

Japan’s Prime Minister and ruling LDP leader Fumio Kishida makes a statement during a live interview with press members at LDP headquarters as polls in the country closed in general elections on October 31, 2021 in Tokyo, Japan. (Photo by Behrouz Mehri/AFP//Pool/Anadolu Agency via Getty Images)

It has been more than two weeks since Japan’s October 31 House of Representatives election, providing plenty of time for the “hot takes” to cool, and for observers and analysts to chew on what the results mean for Japanese politics moving forward.[1] The run-up to the election seemed to promise a fresh menu of political choices to voters, with the coordination of opposition parties in single-member district (SMD) races and clear alternative visions for domestic social policies.[2] But for this observer’s tastes––and perhaps also for the roughly 44 percent of the electorate that chose not to turn out to vote––the election was somewhat stale.

Despite lukewarm public support for new Prime Minister Fumio Kishida, the Liberal Democratic Party (LDP) managed to, once again, win an unexpectedly large majority. Prior to the election, some polls suggested that the LDP might lose as many as 70 seats; and Kishida set the modest goal of retaining a simple majority (233 seats) for the ruling LDP-Komeito coalition. In the end, however, the LDP won 261 seats (a loss of just 15), and Komeito won 32 seats (a gain of 3), for a coalition total of 293 seats (63% of the 465 total seats in the chamber). This puts Kishida in a good position as LDP leader and prime minister after the election and provides him some political capital to distance his administration from the prior Abe and Suga administrations.[3]

Meanwhile, the main opposition, the Constitutional Democratic Party (CDP), lost ground, finishing with just 96 seats compared to the 109 seats it held going into the election. This loss came despite the CDP’s attempt to avoid handing easy plurality wins to the ruling parties in the 289 SMD races by coordinating candidacies with the Japanese Communist Party (JCP) and others. The strategy may have worked in part, seeing as the LDP’s seat losses came from the SMD tier (the party actually gained a few seats in the proportional representation, PR, tier). But the CDP did not seem to convince enough voters in enough districts that it was ready to govern. Moreover, many of the LDP’s losses were to Nippon Ishin no Kai, which did not cooperate with the other opposition parties, and won 41 seats (an increase of 30 from before the election)––completely shutting out the LDP (but not Komeito) in Osaka Prefecture.

More broadly, what does the election outcome suggest about the state of party politics and democracy in Japan? To be sure, the election brought a few morsels of excitement and turnover, including the LDP’s rout to Ishin in Osaka, and voters’ rejection of several senior incumbents in SMD races, such as the CDP’s Ichiro Ozawa, and the LDP’s Akira Amari and Nobuteru Ishihara (Ishihara was also shut out of a PR seat). Prime Minister Kishida himself seemed to recognize citizens’ brewing dissatisfaction with the status quo prior to the election, and has promised to shift course on some of the policies and practices he inherited from the previous administrations.

But on other dimensions, democratic representation in Japan remains stagnant. Since the 2012 general election, the LDP has won large majorities despite being supported by just a third of the electorate (based on vote shares in the PR tier). My own survey research, as well as traditional public opinion polls, indicate that the LDP’s policies (per se) are not more popular than those proposed by the main opposition parties.[4] Instead, the LDP seems to win due to its credibility advantage (“There is no alternative”), a fragmented opposition, and a stable organizational base (which includes Komeito supporters’ votes in SMD races).[5] Short campaign periods and an insipid media environment provide only a limited opportunity for the discussion of policy alternatives, and voter turnout continues to sag. Old men (and their offspring) continue to dominate positions of power, and young people and women continue to be extremely underrepresented (women are now just 9.7% of the Diet, which is among the lowest in the world).[6] Even those who appreciate the LDP’s performance in government ought to recognize these clear deficits in the overall quality of democracy.

My own view is that Japan is fundamentally a multiparty democracy that has been trying (unsuccessfully) to squeeze itself into an electoral system that favors two-party competition. The mixed-member system introduced in 1996 was designed to privilege larger parties, with the hope of encouraging the development of two large parties and alternation in government between the LDP and a center-left alternative. The first attempt at forming this alternative, the New Frontier Party, failed after one election. The second attempt, the Democratic Party of Japan, endured long enough to unseat the LDP in 2009 but collapsed after 2012. In reality, both parties were coalitions of convenience between disparate factions of politicians, and these differences have since been laid bare. The LDP is also factionalized, but it holds together because its members have a taste for power and the LDP is the only shop in town that is currently able to serve it up.

The 2021 election results suggest that the opposition will continue to have trouble coalescing into a single alternative to the LDP. The JCP maintains a stable base of support and can continue to win seats in the PR tier, reducing incentives to merge with a larger center-left party like the CDP. And Ishin has built a solid foundation of support in the Kansai region. Most importantly, the preferences of these parties (and their supporters) differ on fundamental policy issues, so they are unlikely to coalesce any time soon (the stickiest divisions are the U.S.-Japan security alliance and constitutional revision). Some have even argued that the loss of seats for the CDP could have been due to the cooperation with the JCP, which alienated core supporters in organized labor.[7] In addition, Komeito will continue to exist as a distinct party, and its important (but relatively unusual) role in sustaining the LDP’s dominance through electoral cooperation in SMDs should not be overlooked.[8] But even Komeito wins fewer seats than its share of PR votes, and it is further underrepresented when it comes to cabinet portfolios in the government.

As an outside observer of Japanese politics, I cannot help but wonder: how long will voters continue to tolerate such an unrepresentative democracy, both in terms of demographics and in terms of parties and policies? In the United States, voters have grown increasingly frustrated with the two-party “cartel” of Democrats and Republicans and some experts have begun advocating for more proportional electoral rules to encourage the development of new parties.[9] The existing political science research also shows that voters are more satisfied with democracy, and more accepting of election outcomes as legitimate (and “fair”), in proportional systems.[10] In contrast, the key advantage of majoritarian systems is accountability, with the prospect of alternation in power keeping parties responsive to the majority of voters’ preferences.

Over the past decade, Japan’s elections have provided neither proportionality nor any serious opportunity for alternation in power. And many of the LDP’s policies, such as its opposition to separate surnames for married couples, continue to be out-of-step with the majority of voters. If elections continue to produce such unrepresentative outcomes, it could be a recipe for greater voter disenchantment and low turnout, at best. At worst, it could create the conditions for a populist movement or other forms of unrest. Japan has so far managed to dodge this trend among advanced industrialized democracies, but there is no reason to believe it is immune to it.

[3] His cabinet had a slight personnel change after the election, with the resignation of Secretary General Akira Amari (who lost his SMD race but secured a PR seat), and the elevation of Toshimitsu Motegi in his place (with Yoshimasa Hayashi replacing Motegi as Foreign Minister). See the previous post from Gerald Curtis, however, on the lack of clarity in Kishida’s foreign policy goals so far (https://spfusa.org/category/japan-political-pulse/). Independent MP Goshi Hosono was admitted to the LDP on November 5, bringing the total number of LDP seats to 262.

[7] See Asahi Shimbun, “CDP struggled in election despite joint opposition parties pact.” (https://www.asahi.com/ajw/articles/14473021). Note, however, that this view doesn’t square with the party’s almost unchanged vote share in the PR tier from 2017. 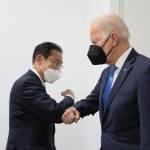 Mr. Kishida Goes to Washington: The Right Way and the Wrong Way

Dr. Gerald Curtis, Burgess Professor Emeritus of Political Science at Columbia University It has been 76 years since World War II, 69 years since Japan regained its sovereignty and 61 years since Japan signed a revised mutual security treaty with the United States. Now that Japan has the world’s third largest economy, a powerful military

The 2021 General Election Campaign Kicks Off

Dr. Daniel M. Smith, Gerald L. Curtis Visiting Associate Professor of Modern Japanese Politics and Foreign Policy, Columbia University The campaign for the House of Representatives general election has officially begun, with nine parties offering the electorate a range of policy visions for Japan’s future. Whether these messages will resonate over the 12 days of 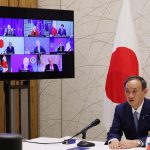